As a former industrial instrument technician, I learned all about calibration procedures, and calibrated many things. I like things to be calibrated to the best possible precision, which is called the limits of resolution (of both the device and the calibrator), directly referenced (or traceable) to an official standard.

It’s amazing how many hams have never calibrated their radios. Back in the good ol’ days, calibrating radios typically involved a “complete alignment” procedure, where an expert technician with the right equipment and service manuals would align everything in the radio. Later, in the 80s, some radios had a calibrate knob that allowed the user to zero-beat the radio to WWV’s carrier. But you can’t actually beat at 0 Hz, because you can’t hear it, so an offset was used, and you still needed a frequency counter to measure the tone. But that has all changed now. Gone are the days of having to be satisfied with being a few cycles off frequency.

The IC-7100 (and other recent Icom radios) have a nifty REF Adjust in the Functions menu, where you can easily set the master oscillator to within about ±0.1Hz (referenced to WWV), and since the radio has a TCXO, it stays pretty close to that. The REF Adjust screen displays a scale of 0-100, but the resolution is actually 1 encoder pulse of the main tuning dial, or 1 press of the + and - buttons on the REF Adjust screen. There appears to be about 2.5 pulses per scale number, and each pulse will change the frequency by about 0.33 Hz (at 10MHz; it varies with frequency).

Does it really matter? Well, a few cycles off may be okay for SSB voice, but causes problems when running computer sound-card digital modes, where both frequency and timing are very important to the success and enjoyment of that aspect of the hobby. Calibrating your radio directly against WWV removes any additional error, since NIST/WWV is the defining standard.

All sound-card chips run a crystal oscillator, which establishes data sample rates, and they are all of rather low quality. The better digi-mode softwares provide a way to correct the sound-card’s sample rates by determining and then applying a correction factor, usually in parts per million (PPM). Having a calibrated sound-card is very important in determining exact audio frequencies and shift timings in the various digital modes.

Note that we are not actually calibrating the sound-card oscillator, just applying a correction factor in the software. This needs to be done for every digi-mode software that you use.

The most visually obvious sound-card clock error is seen in SSTV, where the received pictures are slanted. But until you calibrate your sound-card clock, you don’t know if it’s you or the other guy that’s off! Also, the very narrow digi modes like FT-8 and WSPR need a very precisely calibrated sound-card and radio. Some digi modes have AFC and can compensate a few cycles, but others do not.

After the radio is connected to the computer and audio levels are properly set, consult your digi-mode software’s Help and look for sound-card calibration. MixW and fldigi use the best calibration method: an SSTV-like picture is scanned with 60 LPM sweeps while tuned to WWV. The WWV clock ticks will eventually paint a vertical line, and if it slants left or right, your sound-card calibration is off. The longer you let it run, the better the accuracy, but 15 minutes or so is sufficient.

Using MixW or FLDigi to Calibrate the Soundcard

The MixW package contains a utility called CheckSR.exe, a free utility that is widely available on the web (search for it by name). You don’t need to get the whole MixW package to use CheckSR. It’s just a single file that you download and run. It displays a dialog box where you set your sound-card’s native sample rate, then start it and let it run for 5-10 minutes. After the numbers stabilize (the 1s digit), put those PPM numbers in your digi-mode software’s sound-card configuration panel. This will get you very close.

Next, to test and fine-tune the calibration, use the software’s WWV calibration feature.

In MixW, menu to Hardware, Sound Device Settings, and see the Clock Adjustment PPM fields. If you click Calibrate, it will say that you should switch to SSTV mode, WWV, and follow the instructions in Help. Do so. 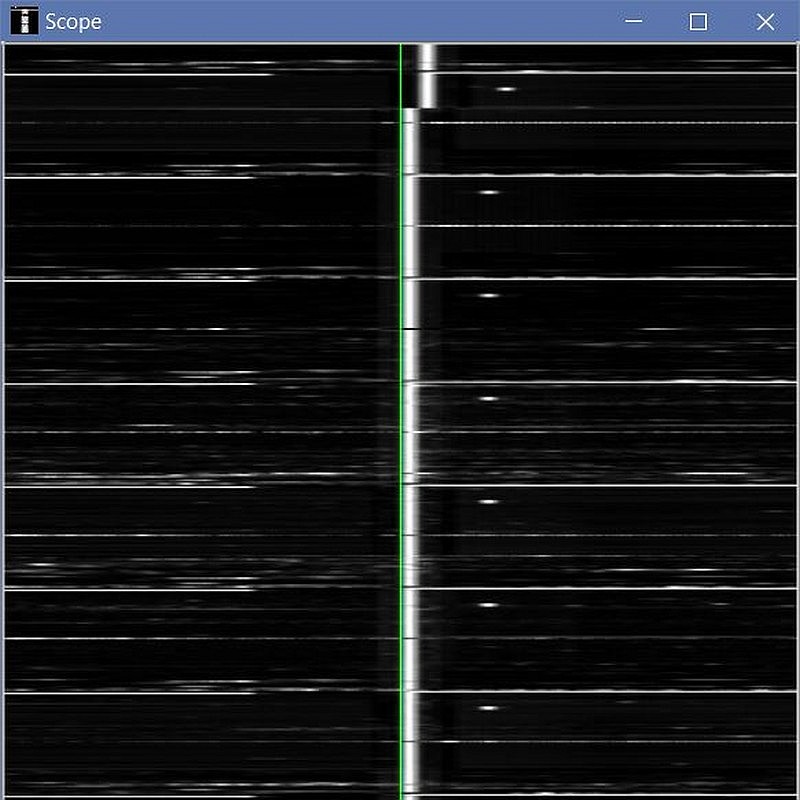 After several tries, I obtained this perfect result, with -16PPM in the RX field.

But What About TX PPM Setting?

Running CheckSR.exe, I observed that the Playback PPM error is always about one-half the Capture setting, so I initially set mine to -8, since RX was -16. But I wanted to fine-tune it, so I did as shown below.

Gettng it more accurate may be done with two radios and computers. Fldigi in WWV mode will transmit 1-second ticks similar to WWV. This may be received on another system that has been RX calibrated to WWV.

Or, simply run two instances of fldigi on the same computer:

This will loop the beeps through the radio’s sound-card chip and compare the output sample rate to the input sample rate. I ended up setting the TX ppm the same as the RX ppm and did not get any slant. I did get slant when I set the TX -100, just to make sure it was really measuring as expected.

Now that the sound-card is calibrated to WWV, we can use it as an accurate audio frequency counter to measure beat frequencies and calibrate the radio’s REFerence oscillator.

Set radio to exactly 5, 10, 15, or 20 MHz. Use the one with the clearest signal. Switch to CW mode, and if it changes by 600, put it back on zeros. Press the Speed/Pitch button and set your CW Pitch to 600 Hz. Switch back and forth between CW and CW-R. The 7100 will shift up or down exactly 600 Hz (above and below the display frequency) and produce a 600 Hz audio beat with WWV’s carrier. Go to Set → Functions → REF Adjust and carefully adjust it (with +- buttons, not the dial) until the audio beat is as close to 600 as possible. Read the audio frequency on the computer.

In FLDigi, menu OpMode, FreqAnalysis. Set the detector line on the waterfall at exactly 600Hz. Open the Floating Scope. In Analysis mode, the scope simply displays 3 lines. The center line frequency is where you have the detector line set, and the upper and lower yellow lines are ±2Hz. On the radio, switch between CW and CW-R, and adjust REF Adjust +- until the signal line is just above and below the center reference line on the Scope. 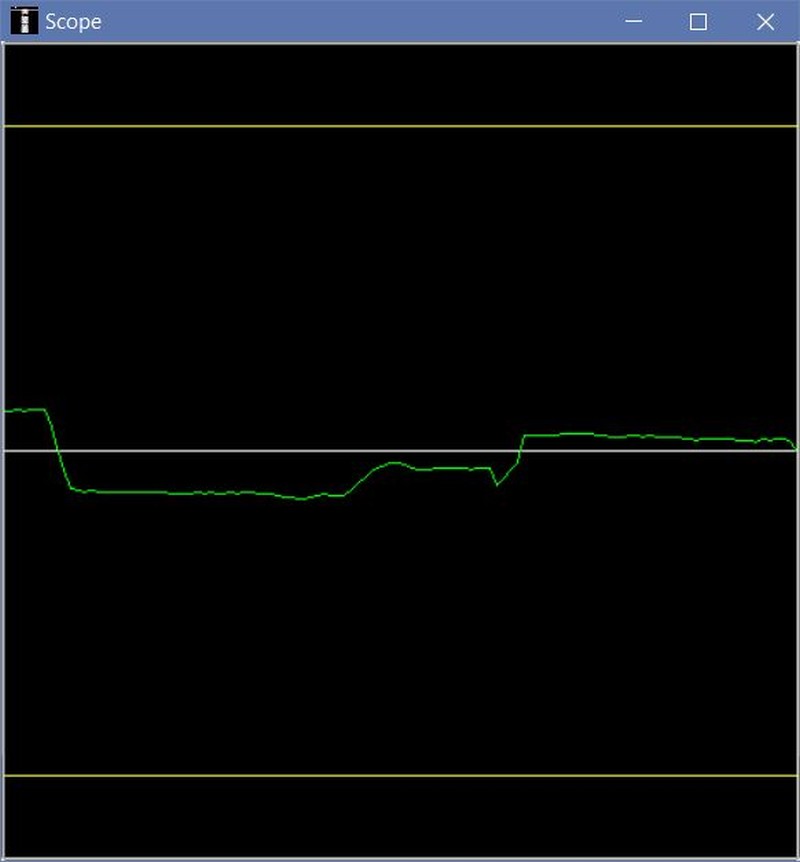 In fldigi’s Floating Scope window, you can see where I switched between CW and CW-R, and then adjusted REF Adjust on the radio, to get within about 0.1 Hz. If you want to see exact values, fldigi logs a file at fldigi.files/temp/analysis.csv. 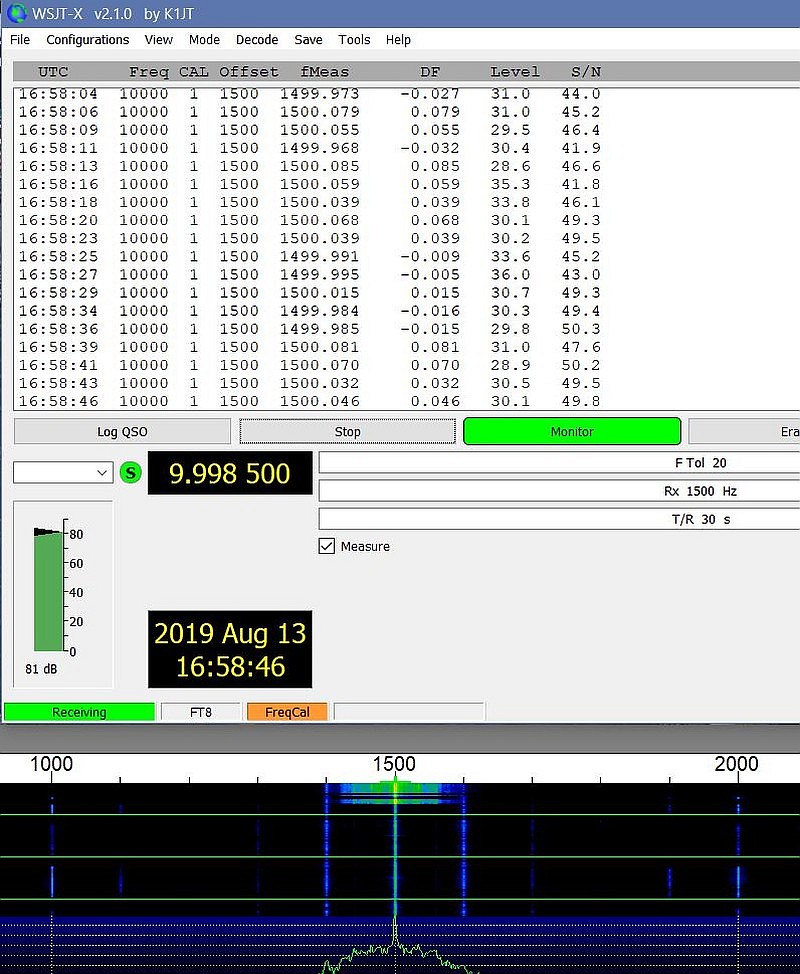 Notice the DF column: the resolution is 0.001 Hz! Note also my calibration accuracy 🙂 (The fluctuations caused by path length variations.) 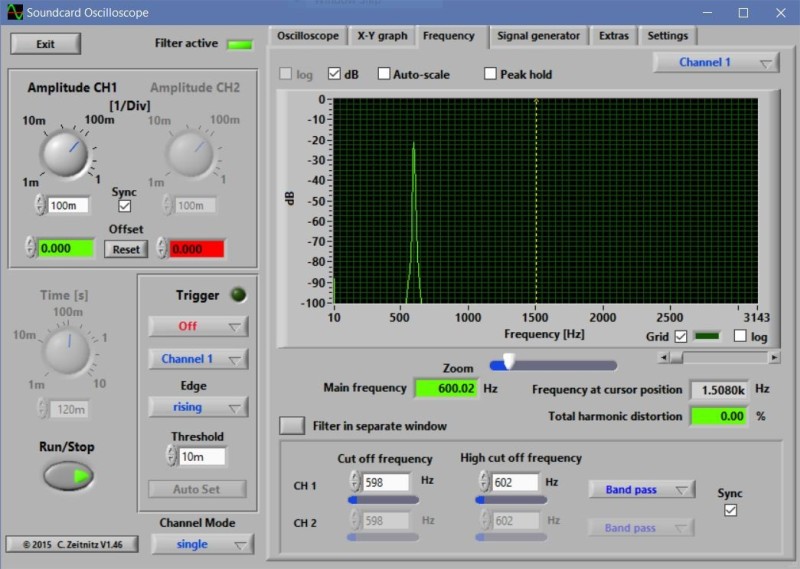 In Settings, set the input to the radio’s USB audio, then set averaging time to 10 seconds, then in the Spectrum tab set the filters for channel 1 to 598 and 602. Set the radio’s filter to 50 Hz. As above, use CW and CW-R and compare the offsets. The advantage to this one is that you can set the averaging time to 10 seconds and average out the path length fluctuations. Resolution is 0.01, as seen in the green Main Frequency field.

Soundcard: simply go to WWV, AM, and read MixW’s PSK31 AFC, or fldigi’s Analysis Scope, on the 500 or 600 Hz modulated audio tones (they are also reference standards, just like the RF carrier frequency).

When new, my 7100 calibrated at 42% on the REF Adjust scale. After a year of crystal aging, it ran 45%, and after two years ran at 48%. All crystals drift with age, so it’s a good idea to recalibrate every few months.

Windows: Soundcard Scope, by C. Zeitnitz (free). There are also some musical instrument tuner software that may work.

Linux: See the baudline site for info and Linux software.

If you are not connected to a computer that will read the audio frequency, just adjust REF Adjust until the CW/CW-R tones sound equal. You can also beat the 600Hz offset against the 600Hz tone that WWV plays on most alternate minutes, which will produce that WAAOOWAAOOWAAOO beat sound. This will allow you to get within a cycle or so by ear. If you have an audio oscilloscope, you can observe the beat between the 600Hz offset and the 600Hz modulated tone, and get it even closer.