No endorsements here—this is just what I got and where I got it.

Total time: about 30 minutes, including clean-up. Conclusion: It was a whole lot easier and faster than expected. This would have taken several hours without the stick blender (olive oil is notoriously slow to trace by hand).

About 5 hours later, I unwrapped it for a peek. White at the corners, and a white film on top. Most of it is gel. Looks like I made a fine batch of axle grease! Oh well, we’ll see tomorrow.

Tomorrow: Solid but not crumbly; soap brick popped right out of the polyethylene Tupper. Cut easily with a cleaver, like a medium-firm cheese.

So how does it work? Washed hands with shavings. Mild, very little lather, rinses easily. But nowhere near as nice as Dr. Bronner’s liquid castile. I guess I’ll make a new and better batch!

Sorry I didn’t get any during the process, but who wants to handle a camera and lye at the same time? These pictures were later staged. 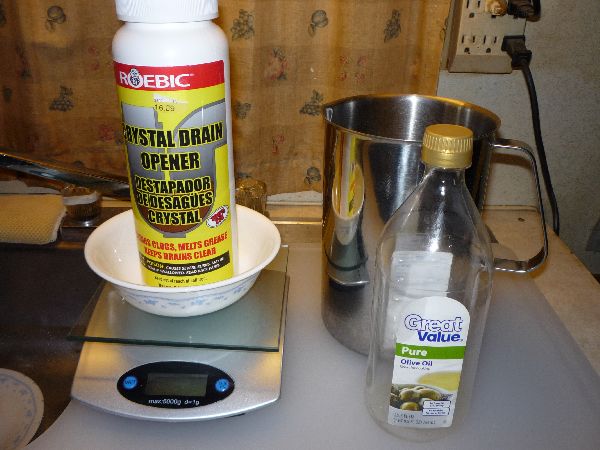 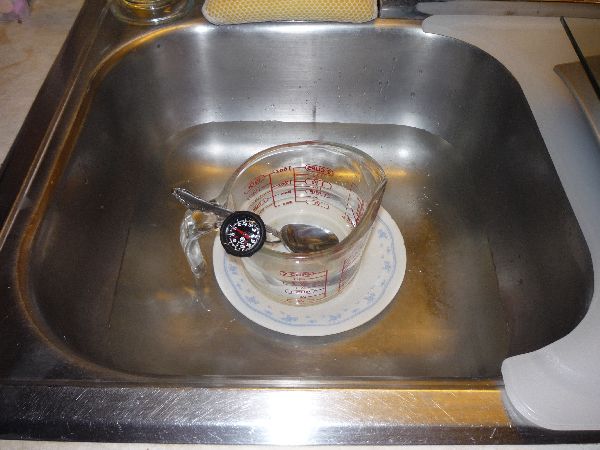 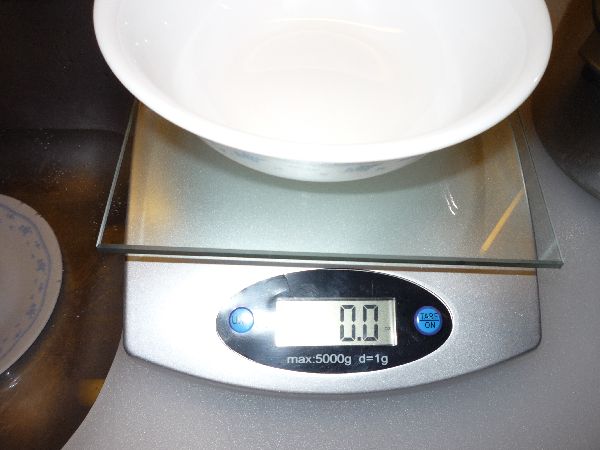 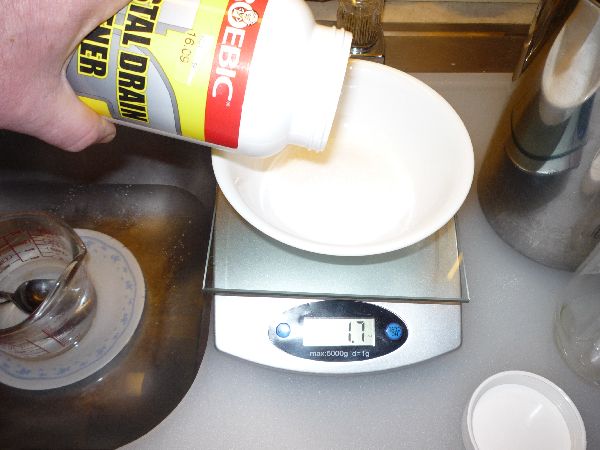 Weigh the lye… Now cap it!
Collect any stray crystals with a damp sponge, then sink it. 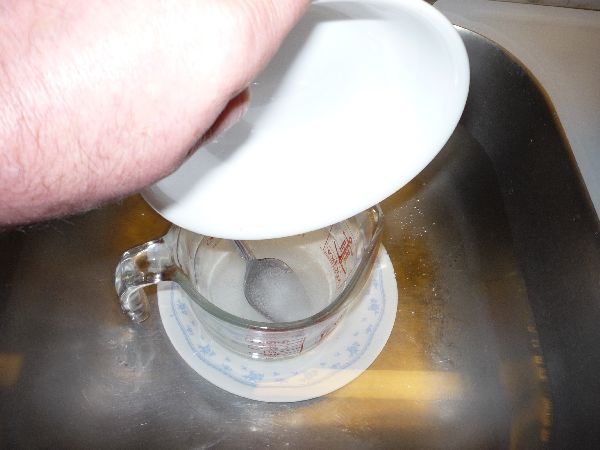 Dump the lye in the water… 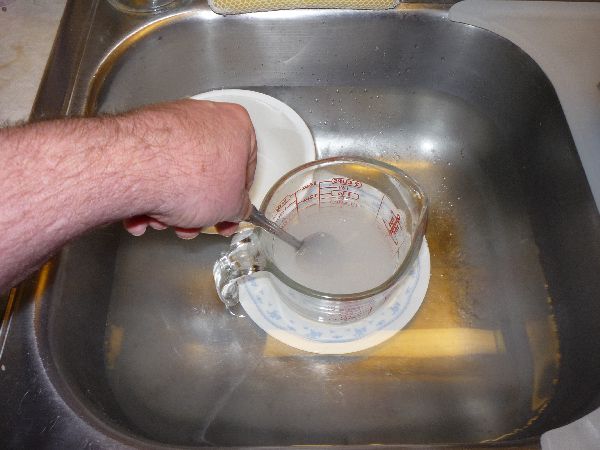 Stir… This is when it will heat up and fume for a few seconds.
Notice the bowl, with a few clinging crystals, went straight into the sink water. 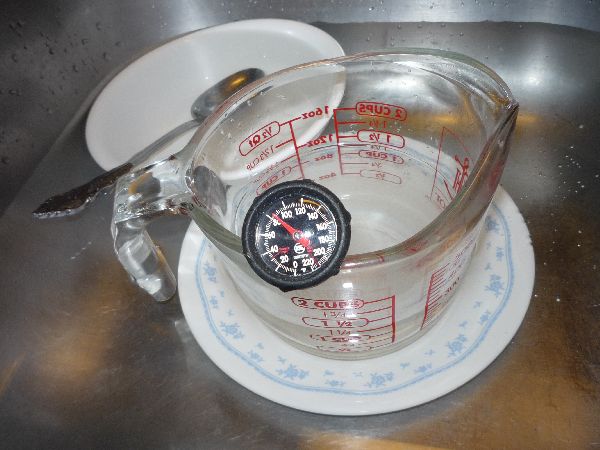 Watch the temp. This didn’t heat up because I used just a little lye for the picture.

I’ll get pictures of the oil/caustic mixing on the next batch. Stay tuned! 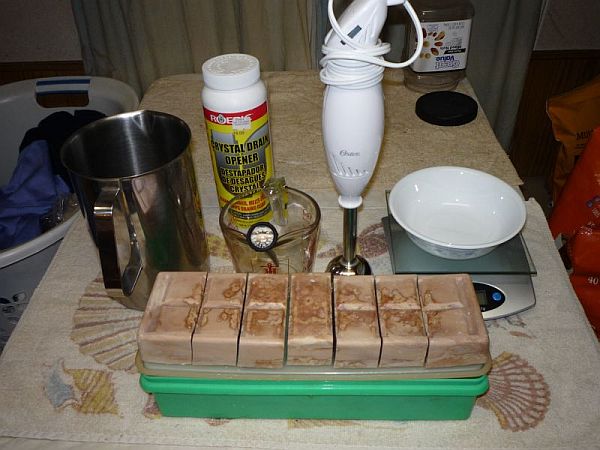 There’s everything all cleaned up. 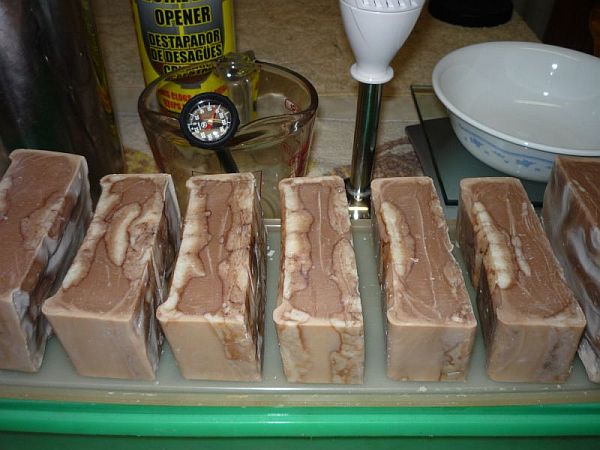 It marbleized itself! Something about the herb tea… 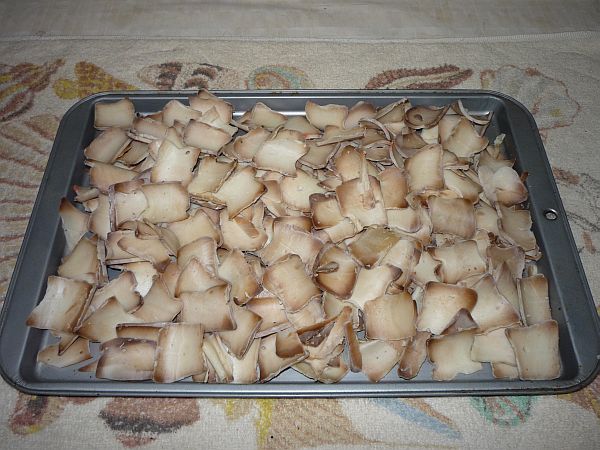 Later, after rebatching with a little more oil, I shaved it (with a Salad Shooter) so I can use it for laundry.

So there you have it, my first botch—er, batch. If this inspires you to jump into the soap hobby, please see the other pages in this article, and the more detailed sites that are dedicated to soaping. There’s a whole lot more to learn than I have presented here—things like properties of various fats and oils, fragrances, rebatching, swirling colors, fancy molds, and most of all, what to do if a batch goes wrong.

I’ve ordered some coconut and palm oil, and a silicone mold (Crafters Choice 6x 6.5-oz squares). When that comes in, I’ll make a proper batch of classic 3-oil, and get more pictures and post the results here. Stay tuned!