Several programs will send CW from the keyboard; two will also accept an iambic paddle connected to the joystick’s “fire” buttons (very easy to do). Two ways to key the radio: You can use your interface RTS>PTT circuit to key the radio, with PTT handled by VOX (break-in operation), or you can build two keying circuits, one RTS>PTT and the other, DTR>KEY. The first allows full-break-in (if your radio supports it); the latter is more “elegant.” In addition, some programs will also decode CW — but in practice, the signal has to be strong or at lest, steady (fading will cause it to miss characters that you can still hear by ear). Most CW decoders are easily fooled by static and poor fist. They will never completely replace the trained ear.

2003: MixW does it all. Send/receive CW keyboard, memory keyer, straight and iambic.

CWType, (free) sends code from the keyboard and an iambic paddle (if connected). Has a nice built-in memory keyer, which supports variable character spacing (Farnsworth), and weighting. Is used alone or with companion program CWGet, the decoder, which comes in a free trial version (fully functional but can’t save settings), and a registered version ($30).

The MFJ-564 paddle looks and works very much like the Bencher BY-series paddles, but only costs about $60. I recommend it. 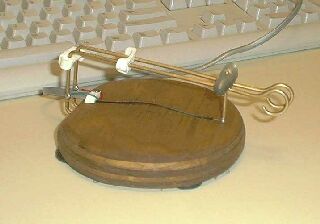 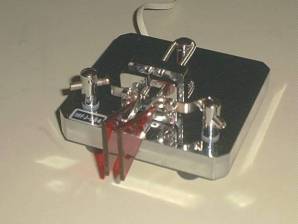 Another strange design I have not yet tried is the “touch-paddle.” This uses a strip of double-sided unetched PC poard set on edge. Each side is connected to gate a JFET. The JFETS key the keyer when you touch the paddle. Nothing moves at all except thumb and finger. That’s what you call, “lightest possible touch, with no feel.”

There are several flavors of PSK:

PSK31 is the most popular digitial mode since RTTY. Much has been written about it. It’s relatively cheap and easy to set up and use, and is much more robust than Baudot and other non-ARQ modes. With a bandwidth of 31.25 Hz, it’s easy to get 10 QSO’s between 14070 and 14071. PSK31 will copy right down in the noise floor — but any strong signals in the receiver’s passband will wipe out weak signals. Mechanical CW filter in the SSB filter slot is very helpful. Use IF shift and notch filter, too.

Some people like to build warblers. That’s fine if you just want to build something. Otherwise, use a computer and one of many good soundcard programs.

Set your sound card sampling rate to 11025Hz. Use a 16-bit sound card. Set Rx and Tx frequencies to 1000Hz. NOTE: This value will get you up and running but if you plan on using a narrow IF filter change it to the center frequency. Try using a narrow filter, or crank the IF shift (PBT) all the way down and use 500 or less Hz rx/tx. Strong signals nearby will desense your AGC. Use your notch filter.

Your sound card output must NOT overdrive your Mic Input. Do not overdrive the sound card input from the Radio. Get used to the Waterfall/Phase indicators for tuning. Don’t use Speech Processor or Compression. Keep the drive level below any ALC indication. Don’t use your linear! 50 watts is plenty – this is a 31 Hz bandwidth!  The key to perfect PSK is a pristine signal — not power!.

Software: The original software for soundcard, by the PSK31 inventor is: PSK31SBW http://www.qsl.net/wm2u/psk31.html. This software works fine but is low on features, so someone made a “front-end” add-on for it called PSKGNR. STREAM (in the PSK31 mode) works so much better! Moreover, STREAM has a giant waterfall FFT tuning display. See http://antoninoporcino.xoom.it/. Logs to Logger if Logger running. Also has two experimental modes of 64 and 128 PSK.

2002 Update: HamScope does two flavors of PSK. Copy two signals at once (search for next qso while winding up the current one, etc).

Lots of people like Digipan — I have not tried it but I’m sure it’s fine. It has more automation features than Stream.

Software: 2003: MixW does it all. Set any shift and any baud. Try out experimental rtty modes, make your own.

2002 Update: HamScope does RTTY and ASCII and is free.

I paid the $35 for TrueTTY (from Russia) a couple years ago and it’s been worth it.

Notes: Always use Lower Sideband otherwise your signal will be ‘inverted’ Select ‘reverse’ in TrueTTY because they do it backwards in Russia (where it comes from). Standard ‘Mark’ is 2125Hz and ‘Space’ to 2295Hz; shift is 170; speed 45 baud. Remember TrueTTY = LSB Reverse 45 170. Yep, it really works well.

Software: TrueTTY by Sergei Podstrigailo, UA9OSV (has Baudot & ASCII RTTY, Amtor-FEC, and PSK31). Requires $35 registration but well worth it if you like RTTY. The author emailed my key (from Russia) within a couple hours of online payment! http://www.dxsoft.com/ Shareware $35. Fully functional except won’t save configs till registered. This is a very nice, well-featured program. He also has nice Morse decoder & keyer programs, with heavy discount when you buy TrueTTY.

Packet (yes, with a soundcard)

2003 Update: MixW does all flavors of packet, with all-new internal coding. Pretty much obsoletes all other packet systems, except I don’t know if it will DDE with WinAPRS (I am asking Nick right now…)

2002 Update: It is now possible to run VHF packet radio, 1200 baud, including APRS, and 300 baud HF packet, using only the soundcard (and, of course, a good isolated interface and a transistor (or optoisolator) PTT switch controlled by the COM port.

Freeware solution: Install latest HamScope. Download AGWPE zip file and unzip it into the same folder as HamScope. Start HamScope and select the Packet mode. It runs the AGWPE packet engine and Voltiare! you’re at the Cmd: prompt. Connect the other end of your soundcard interface to your VHF-FM and start looking for packet. The AGWPE engine can be configured to do 300 baud HF packet, also.

The secret is in the software, just like with all the other modes herein. The place to learn all about it is http://www.soundcardpacket.org/. The software is called AGWPE, which is a software client (or interface layer) which interfaces the soundcard to applications which usually require a TNC. AGWPE will run WinAPRS and several other packet software programs.

MixW will do amtor mode-B (FEC) send and receive with a soundcard. I can’t figure out why anyone would use Amtor mode B when so many other modes with FEC, like MFSK and MT-63, work so much better…

MixW receives Pactor; (G-Tor receive is in the works for version 3). These cannot be transmitted by any soundcard software because they are patented, proprietary modes.

2003 Update: MixW has the usual MFSK-16 mode but you can send B/W and color PICTURES with it, too!

Stream is Nino’s (IZ8BLY) MFSK/PSK software. It has MFSK and PSK, several modes each, including experimental modes you can’t get anywhere else. It works and looks like all of Nino’s fine software.

Software: http://antoninoporcino.xoom.it/  Free. Excellent. Get it. Logs to Logger if Logger running.

2003: Throb is a strange and little-used digital mode, that I can’t currently describe accurately, but several programs do it, including MixW.

Said to be the most “robust” HF digital mode ever made. 14.347. USB above 9HMz, LSB below. Early morning European activity on 28.130. This is a somewhat broadband mode and is used in the voice allocations.

Software: http://antoninoporcino.xoom.it/  Free. Excellent. Get it. Logs to Logger if Logger running.

Hellschreiber is loads of fun! This is a revival of a very old 1930’s mode which works soft of like FAX. The characters are not decoded by the computer. They are simply painted on the screen on a moving “paper tape” and decoded by the eye and brain. Signals way in the mud can still be read. Lots of fonts to choose from. I have found that Hellschreiber transmissions are hard to locate, but if you just get on 14063 and start sending CQ’s pretty soon you’ll have a QSO, then another, then a whole party! European Hell is 28110 or 120 in the mornings.

Notes: Most xmsns are Scottie-1, a few are Martin-1. Voice (ssb) is used with SSTV to make contact and announce the sending mode, etc. A mic switch is essential. MFJ has one; also their interface has mic switching. SSTVers don’t just send blind CQ pictures — they talk into the group first.

2003 Update: I’ve tried them all and MMSSTV is my main SSTV program.
MixW does SSTV fine but I prefer the handy features in MMSSTV.

2002 Update: A great FREE program is now available for SSTV/FAX all modes: MMSSTV.

2002 Update: The one and only really great, and FREE!, SSTV software is MMSSTV — get it at http://mmhamsoft.amateur-radio.ca/ and while you’re there, get his other great free programs — MMANA, DSPFilter, etc.

Others are available cheap or free but they tend to use a “Hamcom” type interface, not a soundcard. Yuck.

2003: Most sstv programs will NOT do HF FAX or WEFAX. JVComm32 is one that does it well, with nice features. Cost money.
MixW has a basic FAX receiver only, no save, no autostart-stop, no scrollback. But you CAN set ANY number LPM.

NOTE: Use FAX mode at 60 LPM to calibrate your soundcard clock to WWV. You can also use SSTV programs that have some mode like WWV calibration, AVT-90 or some other sstv mode with a scan rate that is harmonic of 60.