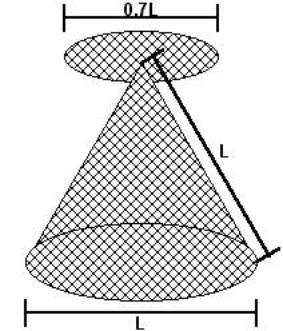 This relatively small, strange-looking antenna may be used outdoors (on a pole) or in the attic, and is suitable for VHF/UHF transmitting and receiving. It has these features:

This antenna is excellent for VHF/UHF scanners (including RTL-SDR dongles), FM-band micro-broadcasters, VHF/UHF business, law enforcement, GMRS, FRS, TV (7 and above), and VHF/UHF ham bands. Discones are widely used by the military, as they need the frequency agility for ALE and frequency-hopping radio systems. It will do all of the above without ever taking it down to retune it. Just build it right (strong and weatherproof), put it up on a well-guyed mast, then use it for everything above shortwave.

Note that some idiots think that discones radiate steeply downward toward the ground. This is probably because discones were originally designed to be used, inverted, on the bellies of airplanes, where they did radiate toward the ground (as needed), due to close proximity of the aluminum skin of the airplane. Then, later, people came along and copied those old downward-cone radiation patterns ad infinitum. A discone on a pole radiates almost exactly like a half-wave vertical dipole (at its design frequency), and pattern graphs from modern military manufacturers like Harris, Telewave, and Benelec show it as such. At progressively higher frequencies, the discone’s elevation pattern angles slightly downward, then slightly upward, then breaks into multiple lobes, like a dipole does when operated way above it’s design frequency. But the discone does it without high SWR or matching device needed. Yes, you can get a 4-bay colinear vertical with 6 dBd of gain, but its bandwidth is about 10MHz, not 1,000MHz like the discone.

These plans use dimensions which will set the lower cutoff frequency below 88 MHz, so that it may be used for FM micro-broadcasting. For cutoff to include:

Eliminating the lower bands simply makes a smaller antenna, which is easier and cheaper to build and support. The antenna has a considerable surface area and wind load, therefore should be placed upon a well-guyed mast. The guys may attach immediately below the skirt of the antenna, without any need for insulators.

Ideally, the discone should be made of copper or aircraft aluminum (“Alclad”) sheet metal, but a heavy screen (¼″ galvanized hardware cloth) will work as well, with lower wind loading and less cost.

Prepare the PVC cap as follows:

Before erecting the discone, test it with a ohmmeter. The center-to-shield of the coax should not be shorted. The shield to cone (skirt) should show short (0 ohms) and center-to-disc should of course show short. 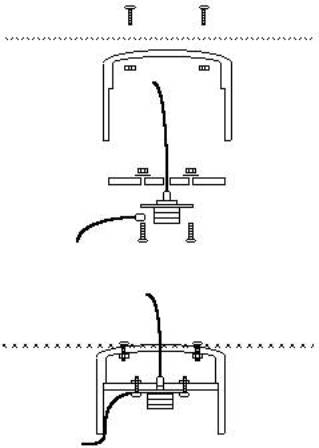 Well, there are many ways to build a discone, and this is just one idea to get you thinking. Or, you might just decide to buy a pretty stainless steel discone (they do look much nicer than hardware cloth!) I can heartily recommend the Tram 1410 or 1411 — they are the lowest cost (if you carefully shop on-line), and they are both pretty and well-made. Note that the Trams don’t have the short mounting stub with U-bolts. They use a recessed hub designed to mount (with set-screws) directly atop standard 1-3/8ths-inch TV mast, or chain-link fence top-rail (which is much cheaper than TV mast), so you’ll need some of that, too, as well as some low-loss coax and connectors.