the little radio with big features… 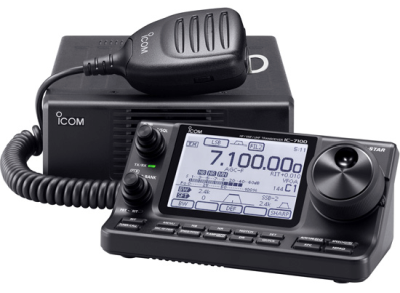 Ahhhhh, the li’l 7100… What can I say? I like it! It performs like big radio, but it’s small. It sounds good, and it’s well made. With its remote head, touch-screen, IF DSP, all-band all-mode (even D-Star), and built-in USB computer interface, it’s, well, about 20 years beyond my old 706MkIIG. It has an impressive list of standard features, like 0.5ppm TCXO reference oscillator, speech, SD card slot (to save/restore settings, record QSOs, etc.), three adjustable filter settings for each mode, an SSB DATA mode (for running all those computer soundcard digital modes), and, and, and… lots of other nifty stuff. The only thing it doesn’t have is a 1st IF mixer output for a panadapter—but it’s fairly easy to add one, and we will, in another article.

Why’d I get one, instead of the 7300? Well, I operate from bed nowadays, and I need that little remote head. I just can’t sit up to a desk for long periods anymore. And though I’m not really into VHF/UHF, or D-Star, it’s there if my interests change. Plus, I got it on sale for $860, and it’s a LOT of radio at that price! Even though it took three months to get the Icom rebate.

Prior to purchasing the 7100 (in November 2017) I spent several weeks reading the articles and user reviews on eham.net, qrz.com, and elsewhere. I carefully considered the reports of low SSB output, ticking noise, and failing touch-screens — early problems that were eventually fixed but last forever on the web. Many reviewers simply didn’t like the 45-degree control head, and the fact that it isn’t attachable. People tend to love it or hate it. One thing is certain, if you’re tied to the idea that a radio must be a rectangular box with a flat face, you won’t like the 7100—well, at least not at first. It isn’t a “pretty” radio like the big desktop models. It won’t impress your friends with a big colorful display or 20 knobs and 100 buttons. But after using it for a little while, the lack of “bling” just doesn’t seem to matter—it just works, it’s very easy to use, and takes up little space. And you can take the control head (up to 11 feet) to your bed or recliner, kick back, and not always be tied to a desk and chair.

I added an SDR panadapter (fed to my 32-inch TV/monitor), a 1kW amplifier, an 8-band EQ/compressor/noise-gate, and a dynamic vocal microphone on a boom, so it’s really not missing anything the “big-boy” radios have, except the high price tag.

There are many things to like about the 7100. Among them,

None of these are deal-breakers, just annoyances that should have been corrected well before the model’s 5th year. I believe that some of them are marketing inducements, little shortcomings designed to urge buyers on to more expensive models.

Much has been written (and Youtubed) about the 7100’s SSB power. Indeed, out of the box you plug in the mic and talk and see about 13 watts on the meter. This is because it has a very fast ALC, pulling average talk power (and typical meters) way down. But the PEP is actually there! On mine, a bit over 100 watts PEP, on a ’scope. There is no need to mod the radio, either with the capacitor mod, or the jumper mod. Version 5 of the firmware brings up average power some, though it still needs to be run with a fairly high ALC indication, and maybe a 1 on compression. If you are used to running SSB voice with little or no ALC indication, well, forget that, and run the 7100's ALC at about 40-80% indication. Also, Icom has corrected the initial ALC overshoot problem, but adding a capacitor to slow down the ALC is a bad idea, as it may cause ALC overshoot, perhaps arcing your amp or tuner.

A reader emailed me asking about the ALC overshoot, as he wishes to use the 7100 to drive an LDMOS amplifier, which are very sensitive to overdrive. I decided to perform some tests and determine the validity of 7100 ALC overshoot claims. I found no overshoot, at any power level, at any ALC level, in any mode.

The DSO in infinite persistence display mode would have shown even 1 cycle of overshoot. I did not see one in any test. Therefore, I can state that the Icom IC-7100 does not have any ALC overshoot. My radio is V.5, made in fall of 2017. Perhaps early models had overshoot, I do not know, but current models do not. Also, some people have modified the ALC timing in 7100s, so if you buy a used one, be sure to remove those mods. Before using any radio with an LDMOS amplifier, it would be good to perform these tests with an oscilloscope to be sure it is safe to use with the sensitive input of the LDMOS.

Setting up the 7100 is pretty easy, but there’s a lot of features in there, and it’s a good idea to take time to go through both the Basic and Advanced manuals. D-Star is particularly confusing, and understanding the D-Star sections of the manual will require some background study on-line. If you have no interest in D-Star, you can get through the Advanced manual pretty fast.

Programming repeaters, and other memory channels, is like earlier Icoms, in that you program everything into a VFO then write it to a memory channel. It’s not difficult, once you’ve done a few, but it’ a very tedious process. I bought RT Systems’ IC7100 Programmer software ($25) with the radio, and it’s darn well worth it. You just set up all your settings in a big dialog box, and memories in a spreadsheet, then send it all to the radio. Get the version without the CI-V programming cable, because it will send over the USB cable supplied with the radio.

The first thing to do is pop in an SD card and leave it. Any time you update memories or settings, back it up to the card. Press Set → SD Card → Save Setting → New File. Use the provided name, which is a date-time string. That way if anything gets messed up, you can always restore all settings and memories to a previous state. You can also pop the SD card into a PC and back up its contents—a good idea, since SD cards can fail. I keep my radio backed up to both the SD card and RT Systems software.

You can record QSOs (hundreds of hours on a 16-gig card), but unfortunately you can’t play them back on-air, without putting the card in a PC and moving them to a different folder on the card. Many people appreciate hearing a brief recording and playback of their transmitted audio, but it just isn’t properly implemented for immediate playback. Why can’t recording and playback be in the same folder? Another irrational oversight in firmware development.

About that Sloping Face

I keep hearing idiots (who don’t own one) calling it an alarm clock. I’ve never seen an alarm clock that looks like a 7100, but if there is one, it’s designer had some good sense in ergonomics design. Others say they can’t possibly mount it in a mobile, which is nonsense. Still others say you can’t mount the head on the radio, as if that’s somehow a problem. These are simply subjective reactions, because the radio looks different than most.

Radios are supposed to be a rectangular box with a flat vertical face, right? Why? Because long ago the knobs on the front of a radio used long shafts driving mechanical rotary switches and variable capacitors mounted on the main chassis deck, so a box was the only practical shape. But modern radios use optical encoders, and the only connection from the face to the radio is a ribbon cable or two. Yet still, traditions die hard (if ever), and most people still prefer a flat-faced box radio, even if they have to prop it up with a phone book to see it (the kick-stand is never quite enough). Having a perpendicular view of the face is even more important with modern LCD screens on radios. Placing a radio up on a shelf is problematic, because the larger radios, with rear cable clearance, require around 20 inches of depth; and a radio up on a shelf provides no arm support while dialing around.

The 7100’s 45-degree face is easily readable on the desk, or mounted on a RAM mount in the mobile. The RAM mount kit with a 2-inch flange on the bottom, a 4 or 6-inch extension tube, and a 2-inch flange with ¼-inch camera stud on top, is about $30 on Amazon and elsewhere. The flange can be screwed down to the top or side of the car’s center console, and the RAM mount adjusted to place the control head under the right hand. Not a problem! Or, if you’d rather place it on the top of the dash (a bad idea—too much visibility, too much sun), you can just get a little dash-cam mount. I recommend screwing it down—don’t depend on sticky-back or suction-cup mounts! They always fail. As for Icom’s optional mobile mount, well, I can’t see how it works; it isn’t very flexible; and of course, it costs way too much. Go with a RAM mount—they make high-quality mounting kits for mounting anything anywhere, and are good enough for police, military, and commercial marine applications.

If for some reason of portability and convenience, you want to mount the head on the radio, just get some 2-inch Velcro and stick it right on top! Coil up the excess cord, and you’re good to go. But you can’t mount it on the front of the radio, because the fan is front and center, and 1 or 2 cables exit the rear of the control head. I suppose one could use a 3-D printer to make a part that would replace the front plastic cover of the radio and contain the head, but it does seem rather pointless…

So in short, the detached, sloping head actually makes a lot of sense, both practically and ergonomically, even if it doesn’t follow tradition. Hopefully, more radios will migrate to split-component designs, just as desktop computers left behind the all-in-one designs 30 years ago, and hi-fi stereos 20 years before that.

Given the form-factor, features, quality, and price, I’m very happy with it. Yes, if I were sitting up to a desk, I’d probably have a 7300. But for my operating needs, the little control head, mounted on a swing-out arm, and a boom mic, works very well. Now if it just had Bluetooth… 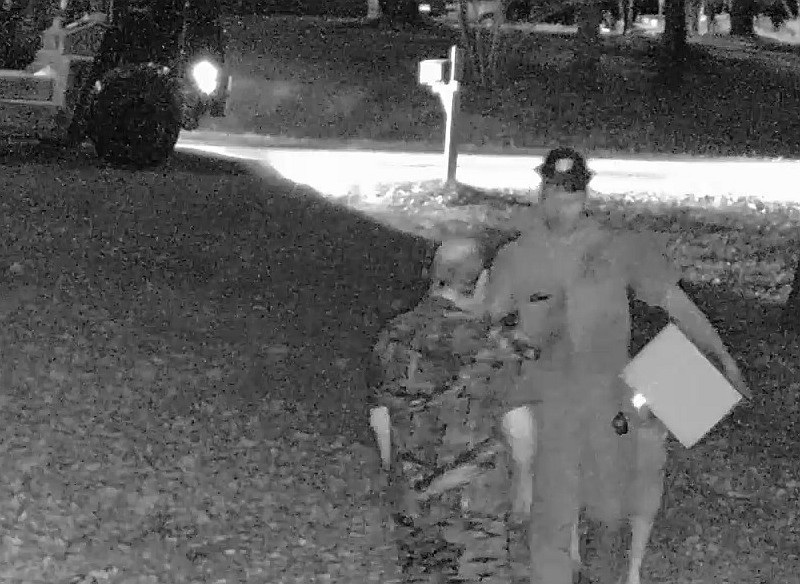 Wow, what a long day! I knew the 7100 was out for delivery, but it didn't arrive until after dark! 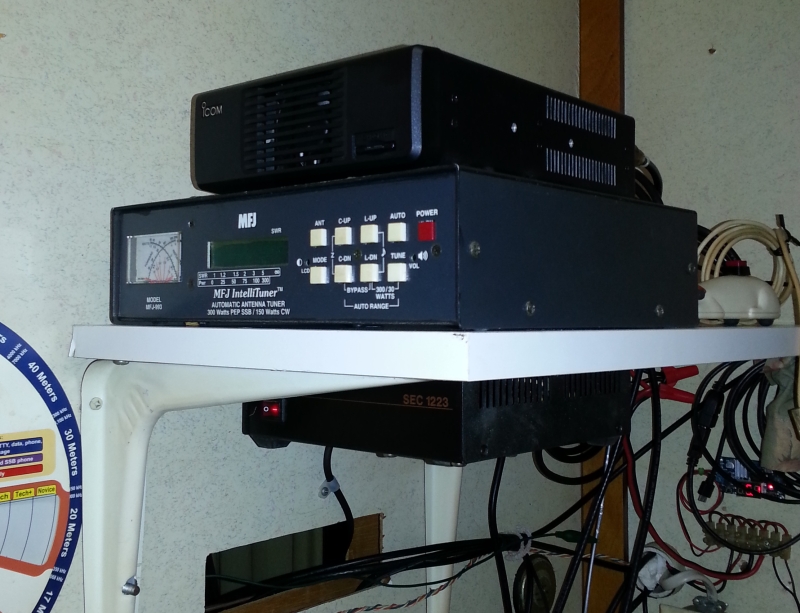 I put the body up there on a shelf, 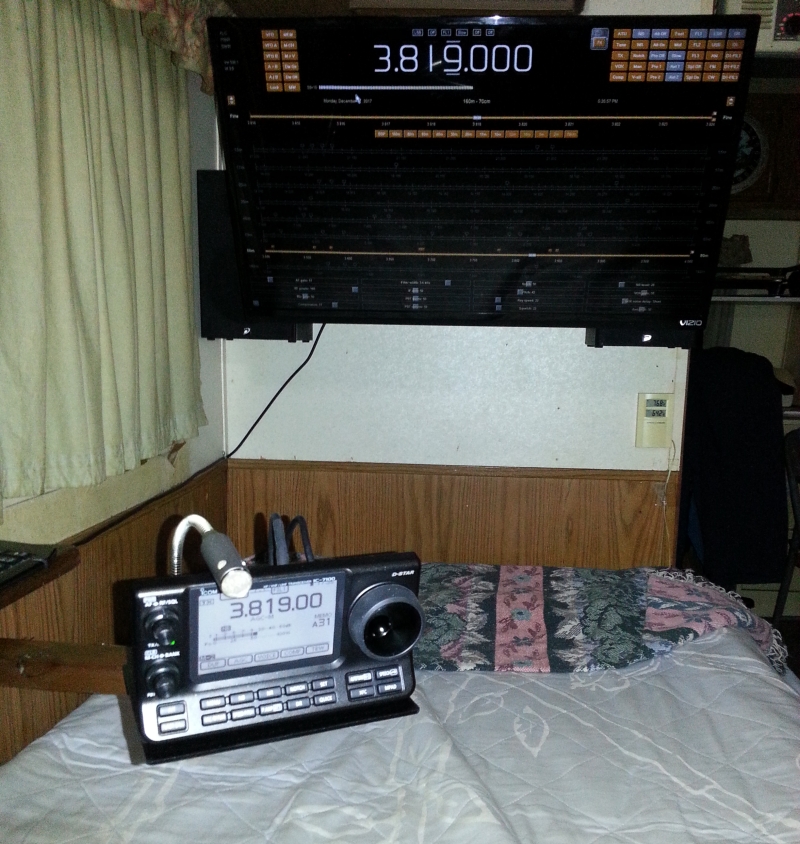 and mounted the control head on a swing-out arm by the bed.

Note that you can use any digital-mode software as long as it can key the radio via CAT command. The virtual serial port in the radio does not support keying with RTS/CTS lines. Update Dec. 1, 2020: FLDigi now supports CW keying via CAT on the 7100, in both semi and full break-in. No more external USB-Serial interface needed! Big thanks to Dave, W1HKJ!

Next we’ll get into sound-card settings and calibration. If you’ve just acquired a 7100, it’ll save a bunch of time. And after that, panadapter on the Big Screen!