This antenna is similar in construction to the 2-meter OFC sleeve dipole I built over 8 years ago, but it is a simple center-fed dipole. I used 1″ thin-wall PVC pipe, aluminum tape, and RG-8X coax. The goal here is to put up a cheap, easy, and quick 2-meter antenna that is simple and unobtrusive, but works quite well.

If you have the materials handy, you can build and install this antenna in a couple hours. This dipole was constructed as follows: 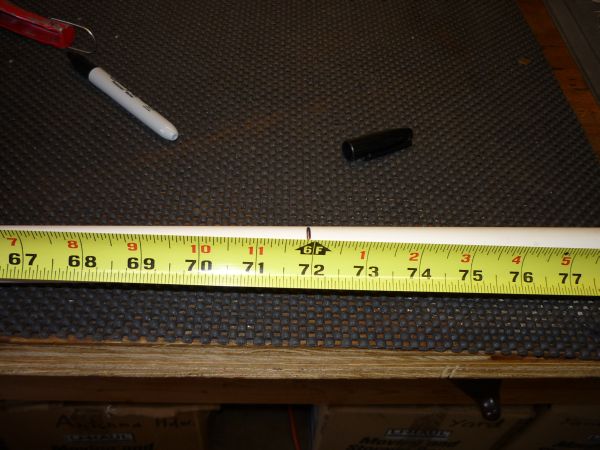 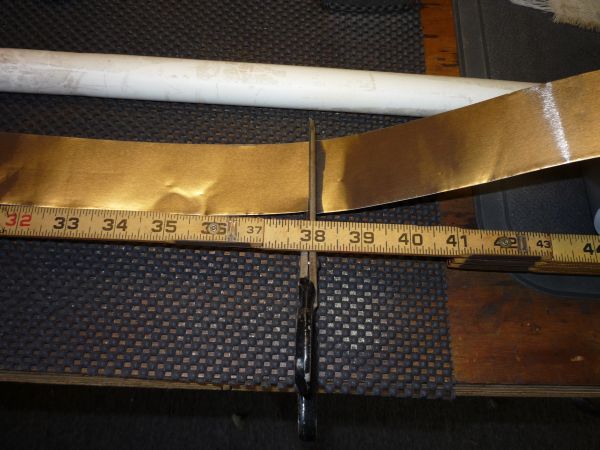 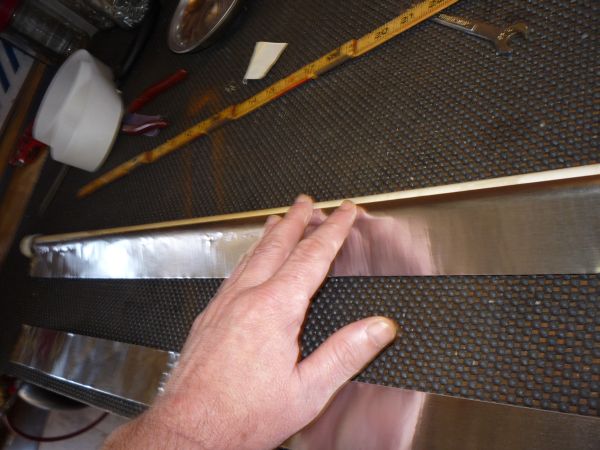 Put one edge of the first tape on the pipe, nice and straight.
Slide fingers along the tape, rotating the pipe slightly with each slide.
Try to make no wrinkles.
Apply the second tape, starting with about a 1/8th″ overlap. 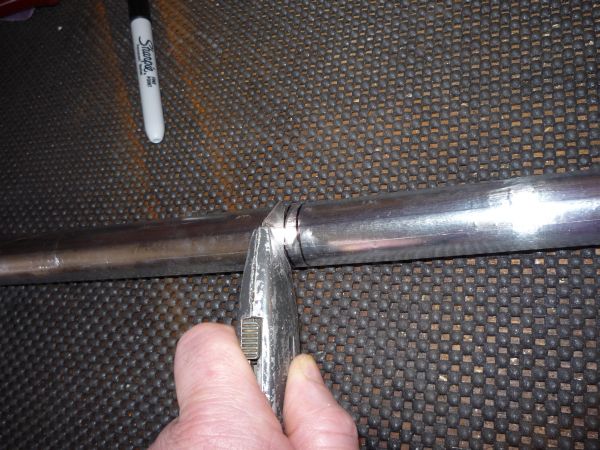 Find the exact center of the tapes and cut away ¼″. 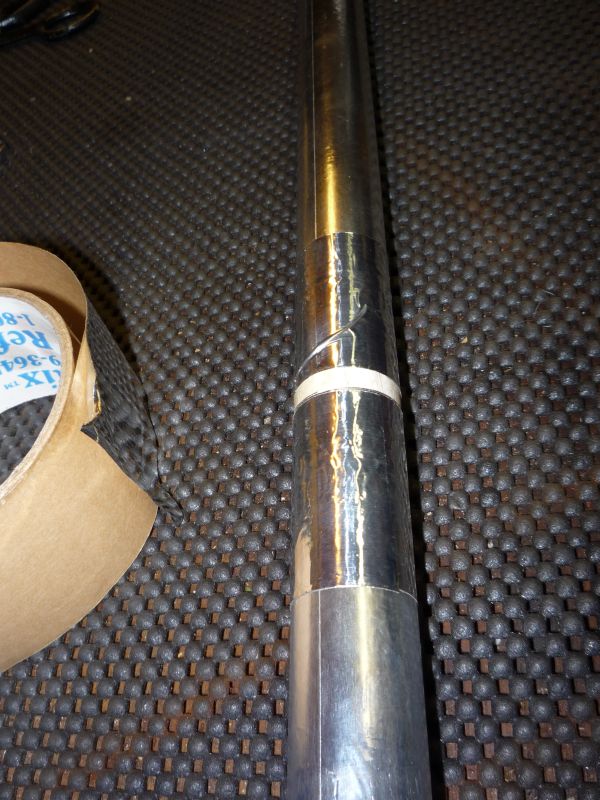 Cut 4 pieces of aluminum tape about 5 inches long. Wrap them
around the 4 ends of the two elements. The extra thickness at
the feed-point will handle more power than a single layer. 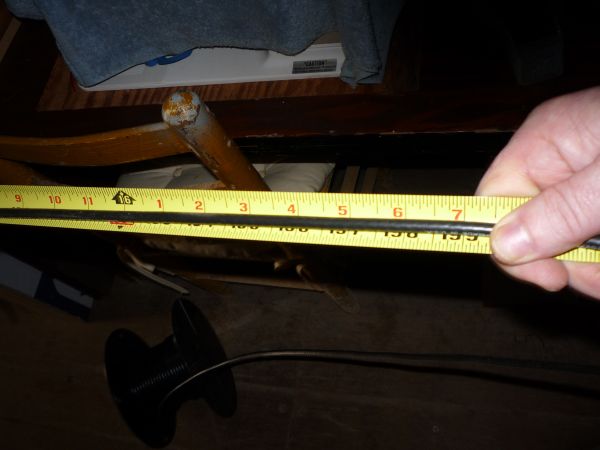 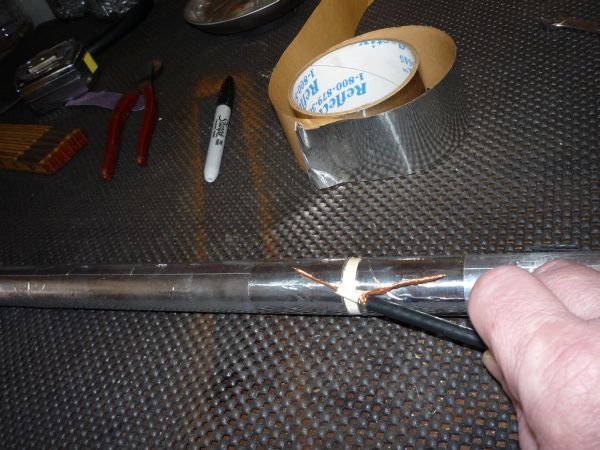 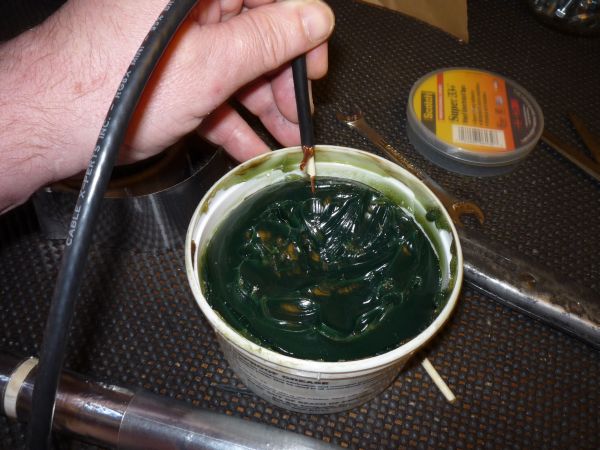 Dip the conductors in synthetic grease to help avoid corrosion.

Use a high-quality tape like 33+, tightly wrap the conductors down against the pipe.
Be careful to not spread grease around while taping. 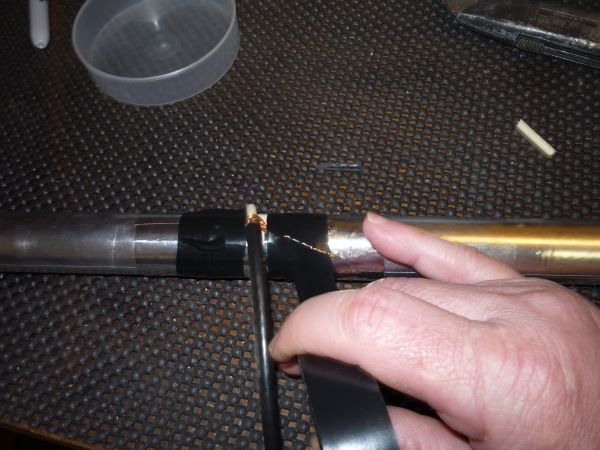 Tape down the shield, as tightly as you can stretch the tape. 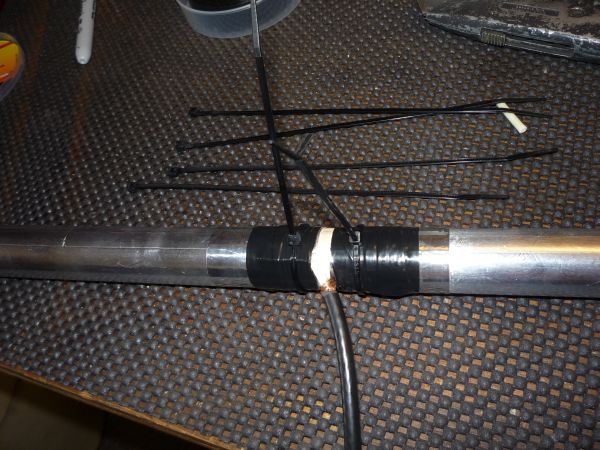 Add a couple of small ties over the taped conductors. Pull them as tight as you can
without breaking them. This is to further mash the conductors into the elements. 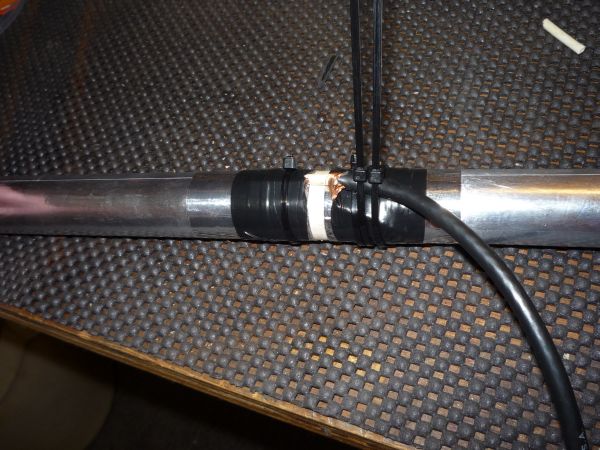 Now bring the coax down and add a couple of ties to it, as a strain-relief. 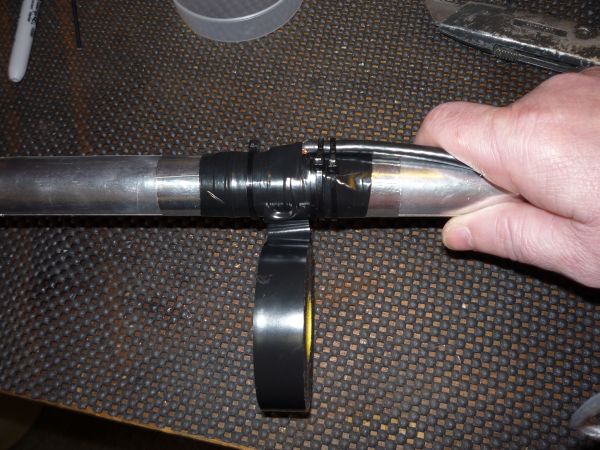 Now tape the whole connection. Start in the middle, half-lapping upwards, then
work down to the bottom, then back up to the middle. Note that you can’t do this
with cheap vinyl tape — you need something that will stretch and seal. 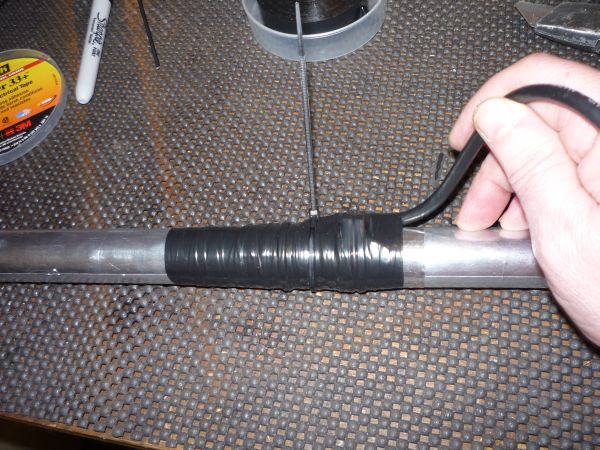 Apply a tie-wrap to the tape’s tail, so it won’t unravel. 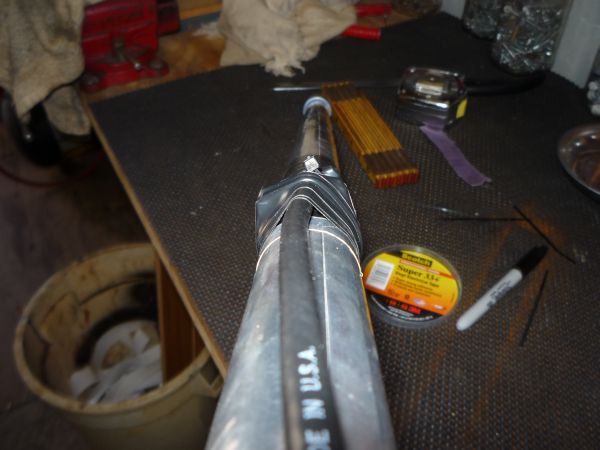 Now notice that you have these two little gaps, where the coax comes out.
Dab a little silicone caulk there to keep out spiders and moisture. 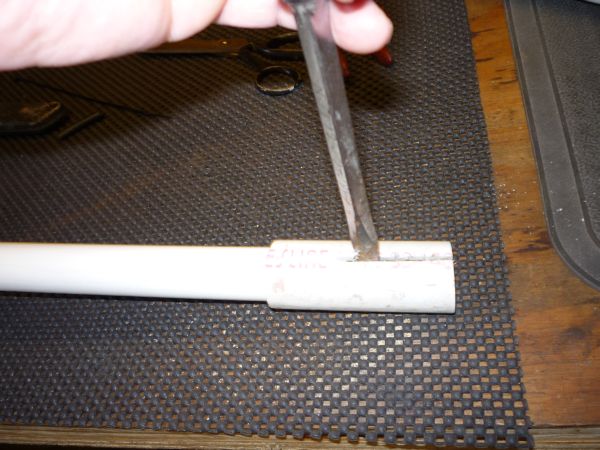 Thinwall PVC is too brittle to clamp it with a u-bolt. Cut a little piece of
sch-40, slit it, spread it, and slip it over the pipe for reinforcement. 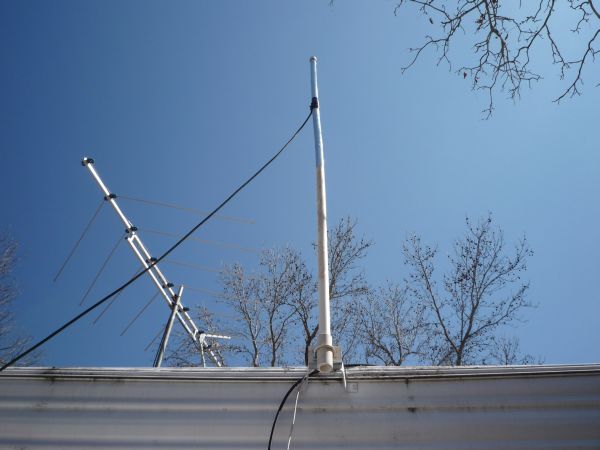 Mount it on something… 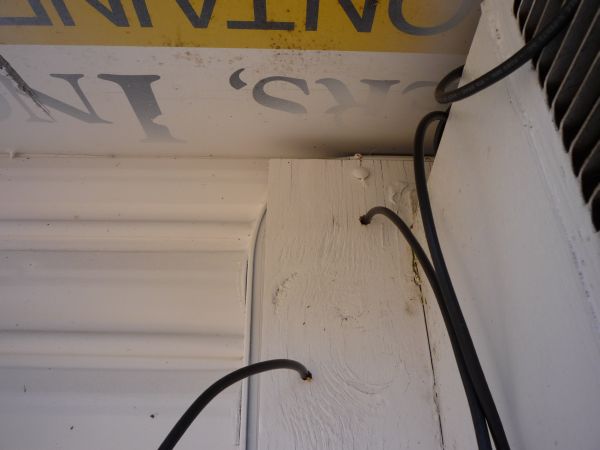 Run the coax in… 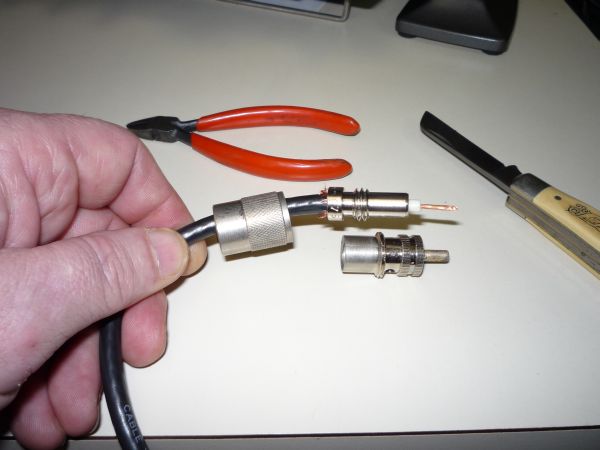 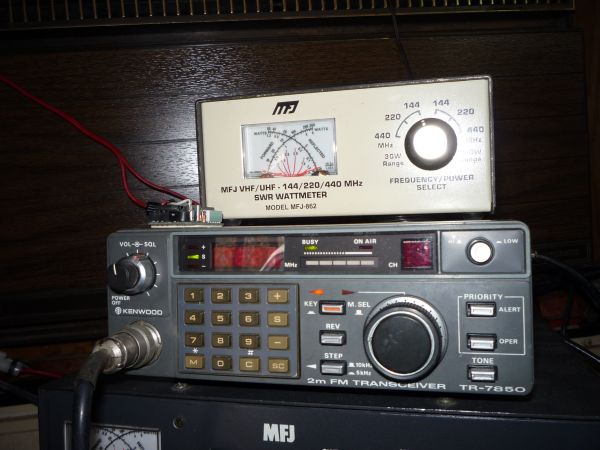 So there you have it—I told you it was easy!