I constructed the shunts as follows: Using a piece of 1/8th-by-1 inch aluminum flat or angle stock, cut to about four inches long, drill three holes. Enlarge the two outer holes until you can force-thread two spark plugs into them. Use new, non-resistor-type plugs. Run a 1/4 x 4-inch bolt down through the center hole and place a nut underneath. Now grind a couple of flats on the last inch of the bolt, so it will clamp easily in your ground rod clamp.

Attach the ladder-line as follows: Measure and strip the incoming line and jumper lead. Crimp and solder uninsulated ring lugs. Apply a little grease and then place them under the spark plugs’ caps. Tighten securely with pliers, but be careful not to twist off the small stud on the plugs! Seal the tops off with silicone caulk or Coax-Seal. Be sure to insulate all connections, particularly if you have curious children around, to prevent RF burns.

Note: A gap of .025 will not arc RF at 100 watts on any band. Higher power may require a wider gap, so watch your SWR meter carefully the first time you QRO on each band.

If you want the lightening arrestors to arc at a lower voltage, you’ll need to obtain a couple of gas-filled arc shunts (commonly used in coaxial arrestors), or obtain commercial MOVs rated for RF service.

NOTE: No arrestor will protect your radio! All are meant to arc at a much higher voltage than your radio can stand. Always disconnect during storms! The arrestors shown here are meant to keep the disconnected jumper from arcing inside the house - not to protect the radio! 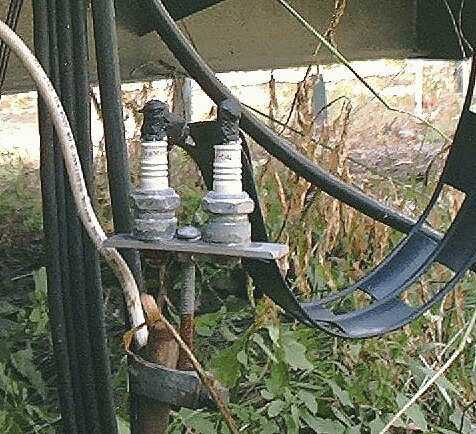 How Does it Work?

I have not had a direct lightning strike. The spark plugs should arc across the .025 gaps and shunt inductive impulses (nearby strikes) to ground, and they probably have done so on many occasions. In a direct strike, the arc current will probably ramp up until it vaporizes the ladder-line, which being swagged from the tower, should fall open and might interrupt that leg of the pulse. The tower, about 50 feet away and also grounded, should then ramp up current until it is destroyed or the charge is dissipated. In other words, three successive failure modes are designed to interrupt part of the strike and channel the vast majority of it to ground, away from the operating position. Well, in theory! I do not hope to ever test that scenario. Still, it’s probably better that no planning at all. Remember that, once a lightning arc starts, it converts the air into plasma, which is highly conductive, and nothing will open the arc until the energy dissipates to the point that the power flow will no longer support the plasma state, at which point it converts back to regular gas. (Plasma is simply gas that is so hot that the electrons are stripped from the nuclei. With most of the electrons being free, it becomes a highly conductive gas).

Note that an inductive impulse that would arc the plugs will still damage the radio if the feedline remains connected. Spark “arrestors” are not a replacement for disconnected feedlines! All spark-gap shunts work because the feedline is disconnected, providing a much wider gap (several inches) than the small gap of the device, thus forcing an arc at that path of lower resistance, before the voltage can climb higher. I assume that the plugs should arc at about 10-15 kV, since they do so in engines. That will still ruin your radio if connected.

If I did it over, I’d plant a 4x4 post several feet (maybe 8-10) from the house, bring the ladder-line down it, and place the arrestor assembly there, with its own ground rod. This would carry a large, direct-strike pulse to ground at a greater distance from the house. The jumper would then cross to the operating position, suspended near the ground. This would be a tripping and mowing hazard, but would probably (in theory) shunt the arc to ground at a distance sufficient to keep it from vaporizing the side of the house.

Another idea I have not yet tried is to run the ladder-line underground, by twisting it, wrapping it in bubble wrap, and stuffing it into six-inch PVC sewer pipe. It should work, if the line is well balanced and kept centered in the pipe. This would be done to provide an easy full-stroke arc path to ground starting at some distance from the house, say, 20 feet. The pipe would have to be totally waterproof on both ends. Why not just use coax? Too lossy at high SWR’s! We non-resonant antenna users benefit greatly from ladder-line, in spite of its drawbacks. The most important consideration is to try to keep it from becoming the path for a fat, billion-amp arc right into your operating position!

If you want to get fancy, mount the spark plugs in a piece of brass or copper bussbar and then braze it directly to the top of the ground rod. If dampness or snow becomes a problem, just push 3-inch lengths of old garden hose up onto the threads of the plugs. Keep weeds and grass trimmed below. Making a plastic housing from a food container would be easy, but I have not found it to be necessary.

Are these ideas totally safe? No. Are they better than nothing? Probably, but that is just an untested assumption. The best lightning protection measure would probably be to design an entry point which opens with a window, so that you can just open the window and toss the whole feedline about 25 feet away from the house. My designs are probably a reasonable compromise between safety and convenience.

I now use an outdoor balun, with coax to a grounded bulkhead. Please see 80-Meter Doublet in the 2018 section. Lots of pictures!