Have you ever wondered how neat, and how much fun, it would be to put a repeater into the stratosphere? This group does so almost every year! 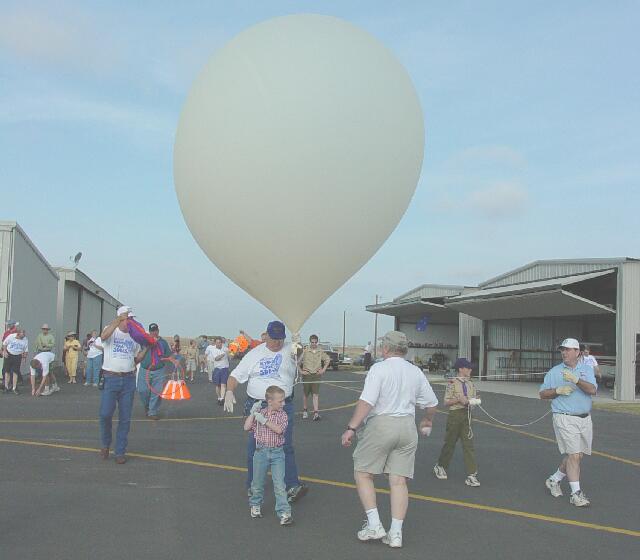 The Launch Team at Hillsboro Airport 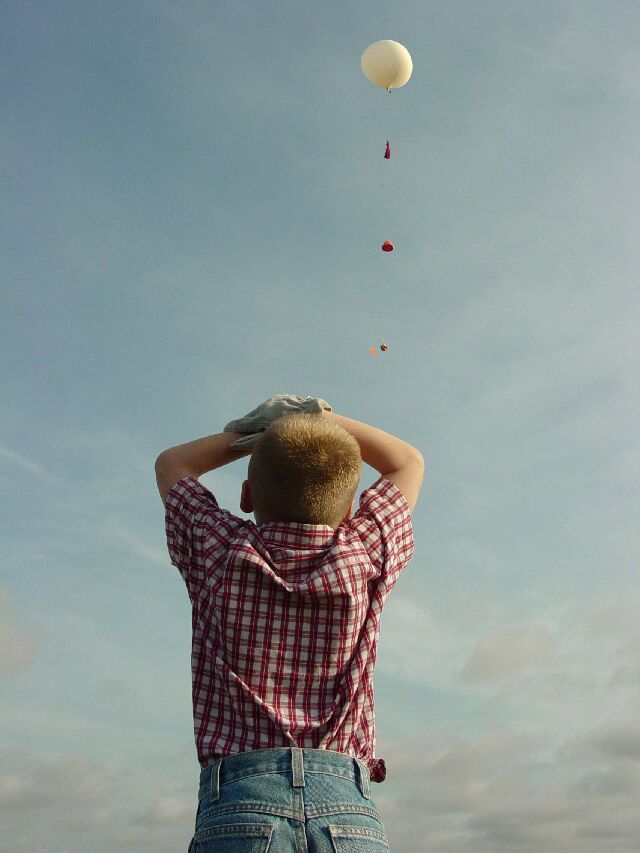 This youngster officially released the balloon.

Almost immediately, it was heard by KV5R from 85 miles 85 degrees with a 12-element yagi.

It soon became apparent that the crossband repeater was listening about 10kc high, at 445.810.
It was configured to transceive continuously, with no squelch.

The parrot repeater on 146.500 (simplex) cycled normally every 20 seconds but it heard (and parroted) very little audio, due to its receiver being severely desensed by the crossband repeater.

Hundreds of people made contacts on the crossband repeater. Stations were heard as far as Tulsa and Houston. Others reported excellent ATV during the flight.

KV5R made three contacts on the crossband repeater, at 16,800, 54,000, and 87,000 feet MSL. Other AARC members, Jim WD5GXX, and Paul N5FY made several contacts. Jim was even heard using a handie at 5 watts and a handheld yagi — not bad for 100 miles UHF! KV5R attempted a handie with a handheld sleeve dipole but was unsuccessful — the repeater was very busy with much stronger stations.

The helium balloon rose to 94,515 feet (18 miles) before bursting. It travelled generally WNW at around 15 MPH, landing about 5 miles ESE of Glen Rose, in heavy briars and woods, quite near the Brazos river. It was recovered by Melissa Rasmussen, KM5R at 11:55 AM. (Lower-center) 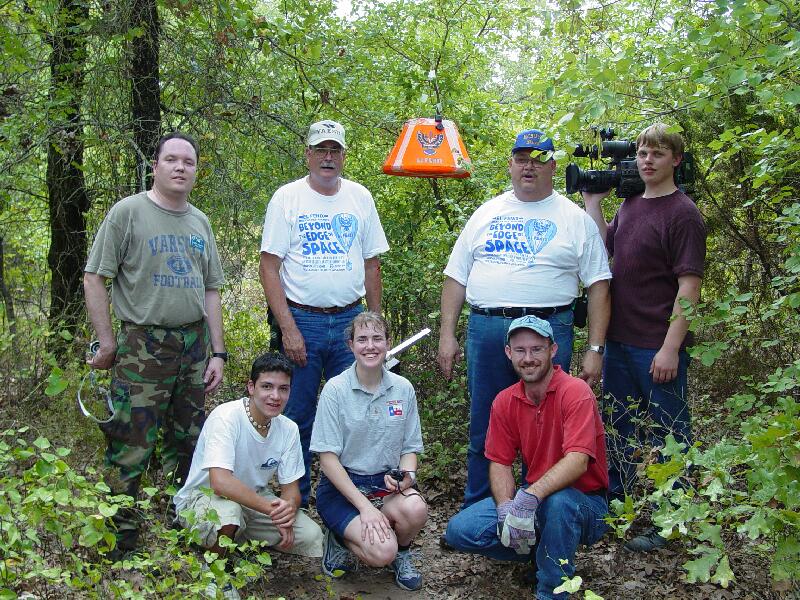 W5SJZ said, on the 7232 HF net, that the 35mm photos and other info would be available on their web site in 1 or 2 weeks. Check the Lockheed web site for updates:  http://www.qsl.net/w5sjz/

We later heard that the video package became detached and fell from the balloon assembly at about 15,000 feet during descent, landing several miles away. Several days later, the video package was discovered and returned by a supervisor of a gravel pit. We have not heard whether the electronics survived the fall, but assume the videotape did. The package was encased in styrene foam. More info as we receive it! 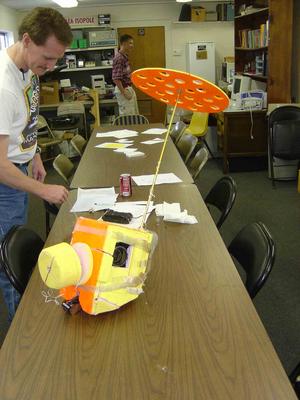 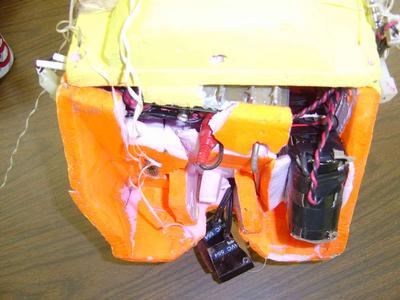 The recovered video package, which fell about 15,000 feet

Many thanks to all who made the flight possible!

The launch will take place on Saturday, August 30, at approximately 9:15 AM from the Hillsboro airport.

The balloon is expected to reach an altitude of 100,000 feet during its 90 minute ascent.  After bursting, the balloon will take about 25 minutes to parachute back to earth.  During the mission, ground-based recovery teams will track the balloon using directional antennas and APRS gear.  A private plane will also be assisting with recovery efforts.

The balloon will carry the following ham radio payloads:

From high altitude, the communications range of the balloon will be approximately 500 miles.  Hams from all over Texas, Oklahoma, Arkansas, and Kansas will be able to communicate with each other using the balloon’s crossband repeater.  Hams in east Texas will most likely be able to work it with handhelds.

Boy Scout troops from Burleson, Ft. Worth, and Hillsboro will be participating in the mission as part of their Radio Merit Badge activities. During this mission, the Lockheed club will be evaluating how future missions can be conducted in conjunction with educational and Scouting activities.

The general public is also invited to observe the launch at the Hillsboro Municipal Airport located just off I 35W on exit 3.

Lockheed members are carefully monitoring high altitude wind data to insure that the balloon does not come down within the restricted airspace surrounding the President’s ranch in Crawford.  If the launch cannot proceed due to unfavorable winds, the following Saturday will be the backup launch date.