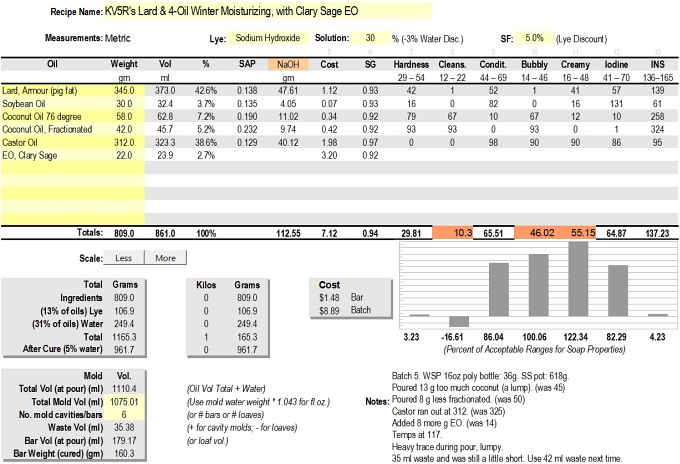 The plan was to push the cleansing way down to around 10, get the conditioning as high as possible, and make it real creamy. Given the oils I had on-hand, this meant pushing way up the Lard and Castor, and way down on the Soybean and Coconut. I would have used a lot more Soybean but it has a high iodine and, with all that Castor, it was hard to keep the iodine under 70. I read on some good soaping site (forget which one) that for a good winter soap the cleansing should be around 10 and the INS around 136, with the conditioning as high as you can get it. So that’s what I did here. The hardness is a bit under 30, so it’s gonna be real soft soap—probably a nice makeup-remover for the ladies. You can see the theoretical results in the properties in the screen shot above. Time will tell if this one’s a success or not, so check back here around mid-February (2011).

Developed using my soap recipe designer spreadsheet, with the goal of pushing the properties as far as possible. Don’t use this recipe ’til all the results are in.

Same as the last batch.

Same as the last batch. It was again at heavy trace by the end of the pour. My volumetric calculations were a tiny bit short. Should be targeting 1120 ml for the silicone mold. Once I get that nailed down, I’ll put a correction factor in the spreadsheet.

Tomorrow: Un-molded easily, is soft (you can dent it with firm finger pressure), and the scent is light and tolerable. I always keep a little fan running on a top shelf, so I put the bars in front of it to speed the drying.

I didn’t take pictures during the process this time. See the pictures in batch 4.

The ½-tsp of cinnamon gave it a light pinkish-lavender color, with small cinnamon dots.

Washed hands with one a few days later. Something’s wrong—cleansing is indeed low, doesn’t dry the skin, rinses easily, but it isn’t producing good lather. According to the numbers, this soap should produce gobs of creamy lather. Will check it again in a couple weeks; maybe it just needs to cure some more, or maybe I pushed the properties too far.

So there’s my fifth batch. What did I learn?

Stay tuned for more in the coming weeks.