what’s in a probiotic pill?

I purchased a bottle of Now Foods brand Probiotic-10 digestive bacteria, in the 25 billion per capsule strength. It comes in cellulose capsules that contain cellulose powder loaded with 10 strains of dry, inactive bacteria. Prior to purchase, I read many reviews where people were concerned that these do not ship cold-packed, and that the heat of summer shipping might kill the critters. Also, I wondered how long it takes for these bacteria to become active after hydration. Ahhh, but I have a microscope! Let’s see what’s really in those capsules, then let’s see if we can culture them.

Bacteria come a variety of morphologies, but they are very difficult to identify when alive and moving. They are so small that they appear near the limits of optical microscope resolution. For closer study and identification they may be smeared, killed, fixed, stained, and mounted to the slide. 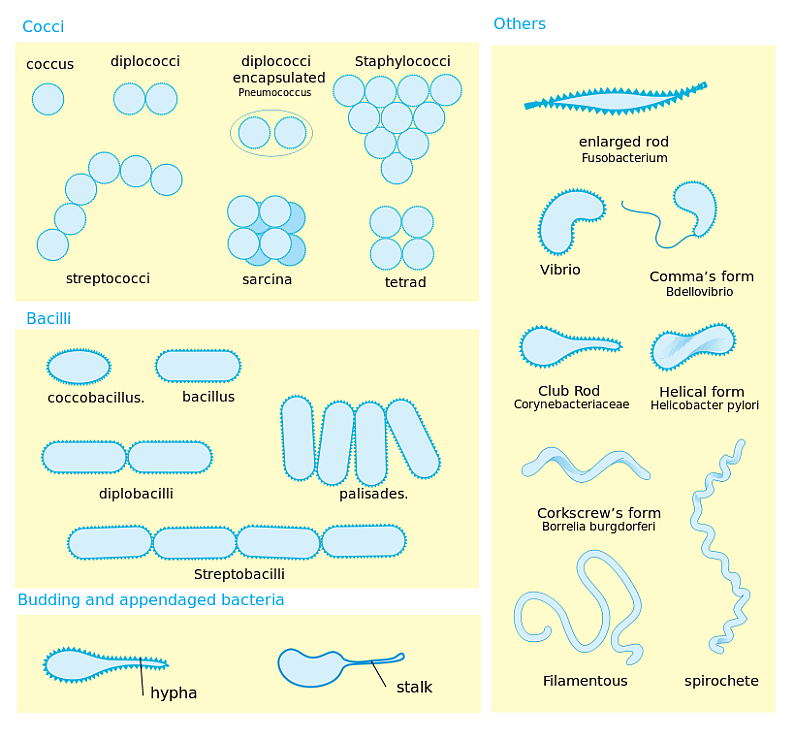 First, let’s take a bit of powder from a probiotic capsule, hydrate it, and see how lively it is, right out the bottle. 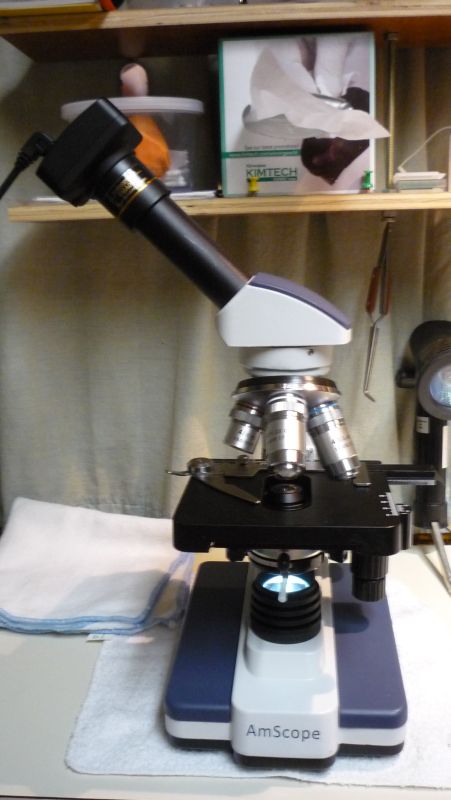 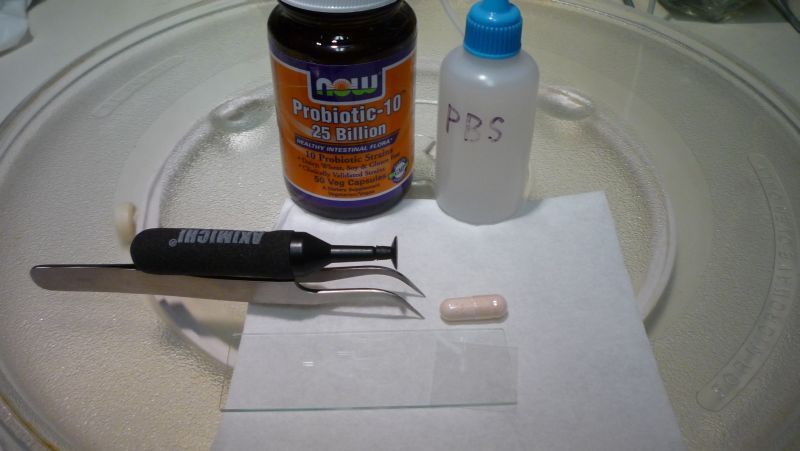 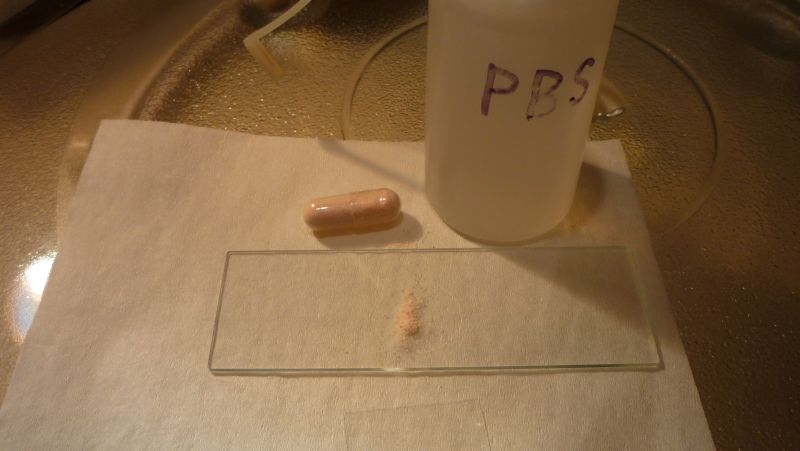 I put a little bacteria powder on a depression slide… 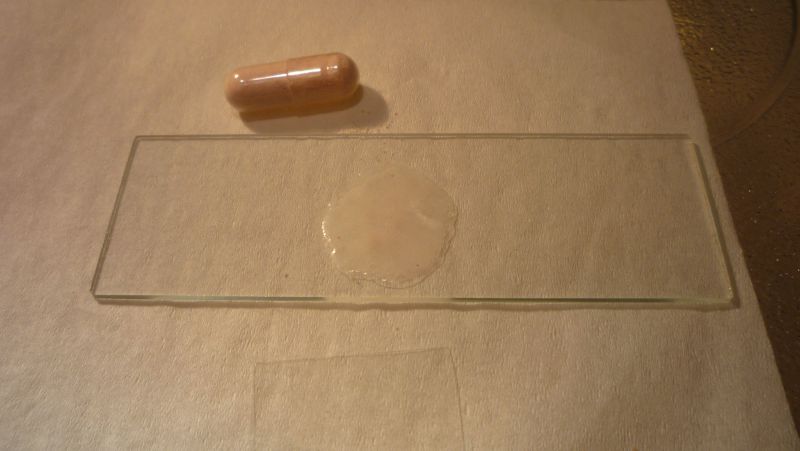 and added a few drops of phosphate buffered saline (PBS)… 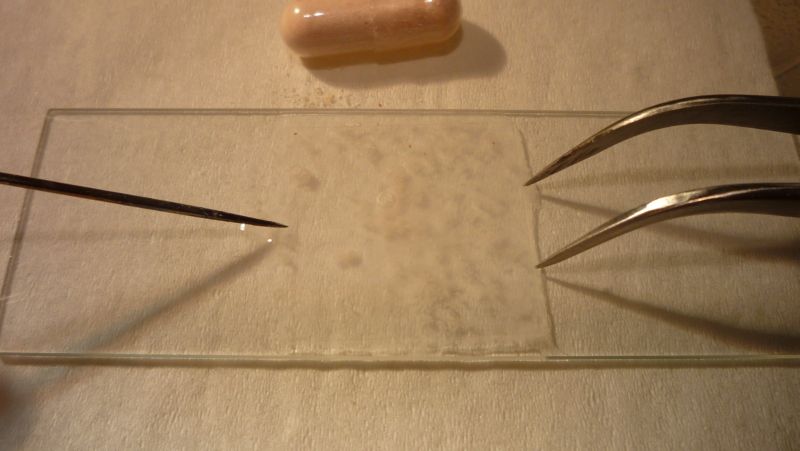 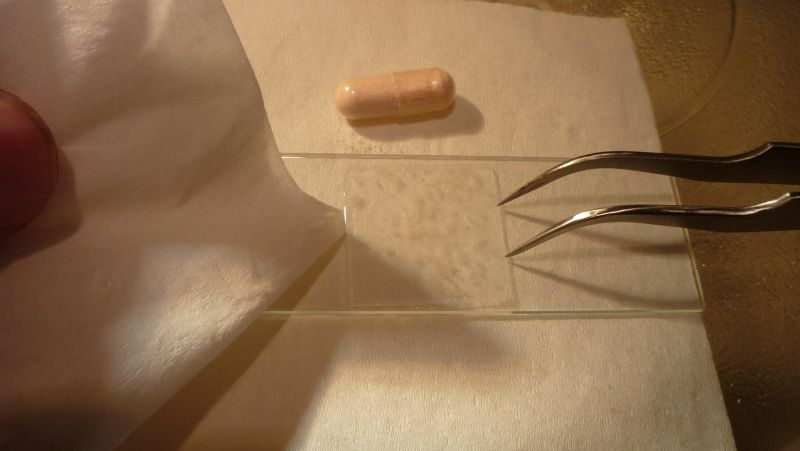 Soak up the extra water to land the slip. 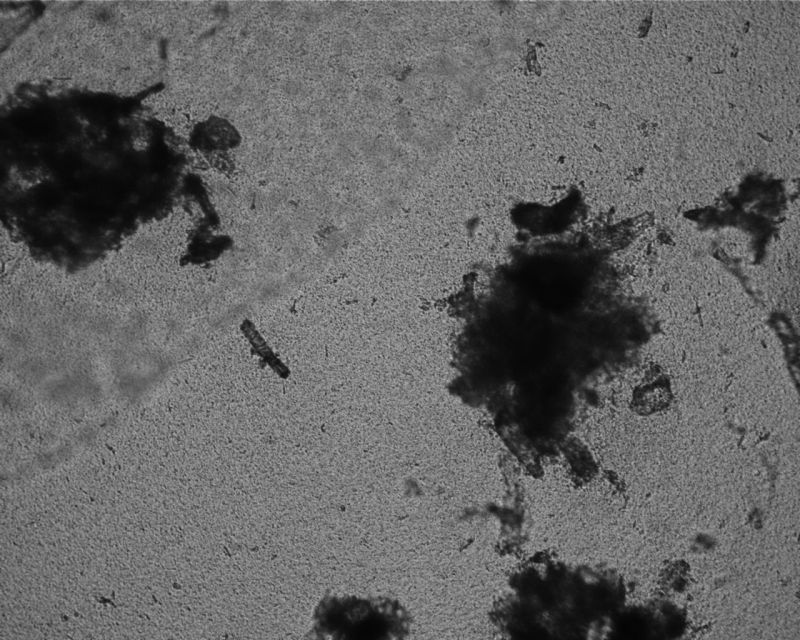 At 100x, with green filter and monochromatic imaging. The sandy background are bacteria, and the blobs are the carrier material from the capsule. 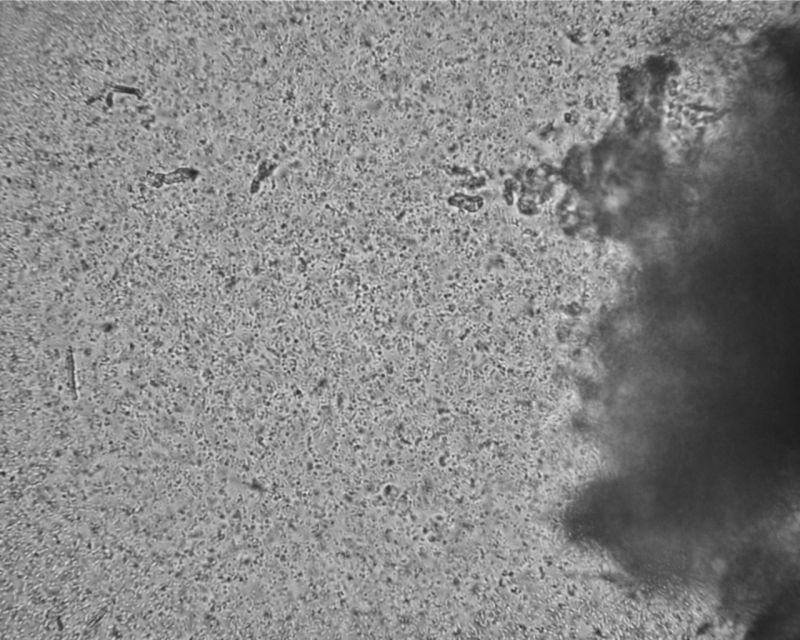 At 400x, we can see the bacteria as dots, and they are wiggling! I’m surprised to see that nearly all are lively, even though they were shipped in the summer heat, and they have been hydrated only for a few minutes. 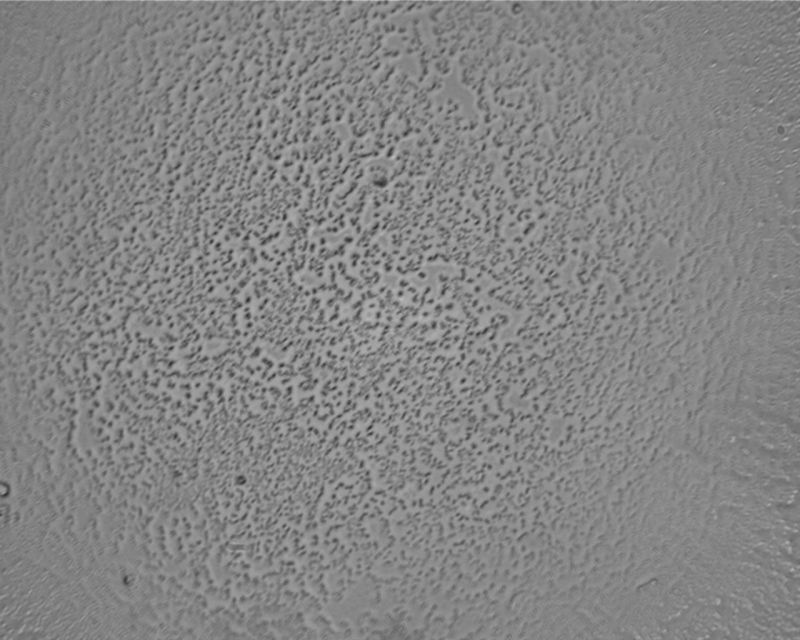 This is at 1000x (the 100x objective, without oil), just to show the spherical aberration of this non-aplanatic lens. 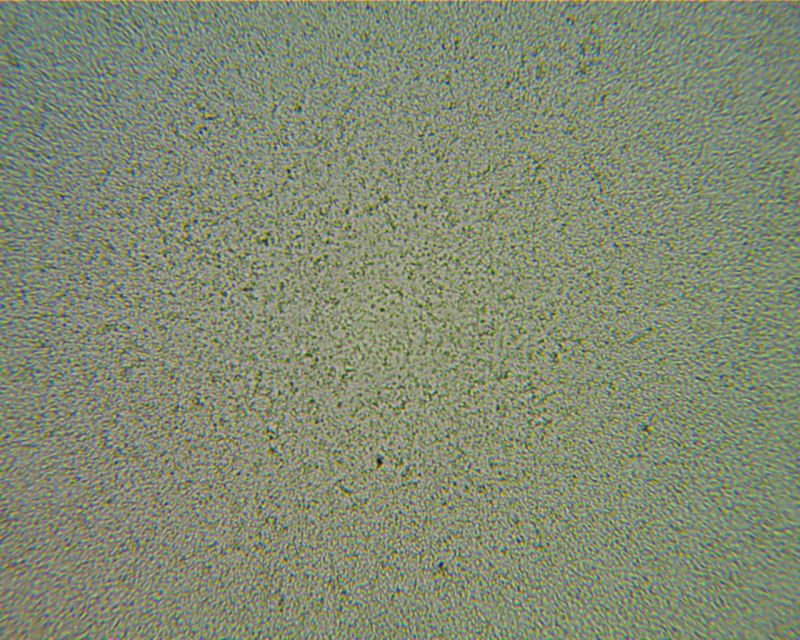 This one shows the image in color, with white light, just to show the chromatic aberration. When color doesn’t matter, it’s better to pop in a green or blue filter and image in monochrome.

Now, to show the lively movement, let’s watch a short (2:15) video. Note that when we focus to the bottom (the top surface of the slide), there are many bacteria not moving (either dead or not yet activated), but there are many more in the focal layers above that are very lively.

Then I wondered if I could multiply the bacteria and make my own probiotic. I did a little research on-line about culturing various lactobacilli strains. This is commonly done when making yogurt and pickling things like cucumbers or sauerkraut. A culture may be grown in water containing rice starch in an anaerobic environment. It’s important to sterilize the jar and the rice (by boiling), then cool it, shake it, strain out the rice, then add the bacteria and seal it up. These are anaerobic bacteria, and oxygen won’t hurt them but will allow aerobic bacteria and yeast to grow, which we do not want, as airborne molds would contaminate the culture.

Safety: If you want to culture your own probiotics (as many people do), be sure to read articles on the process and do it safely. This means sterilizing both the container and its food solution, adding the starter bacteria, and sealing it up. If done properly, it is no more dangerious than making yogurt or pickling vegetables, as has been done for thousands of years before bacteria were discovered. When using the culture, always look and smell first; if it's the slightest bit off-color or smell, throw it away, then wash and sterilize the jar and start over. 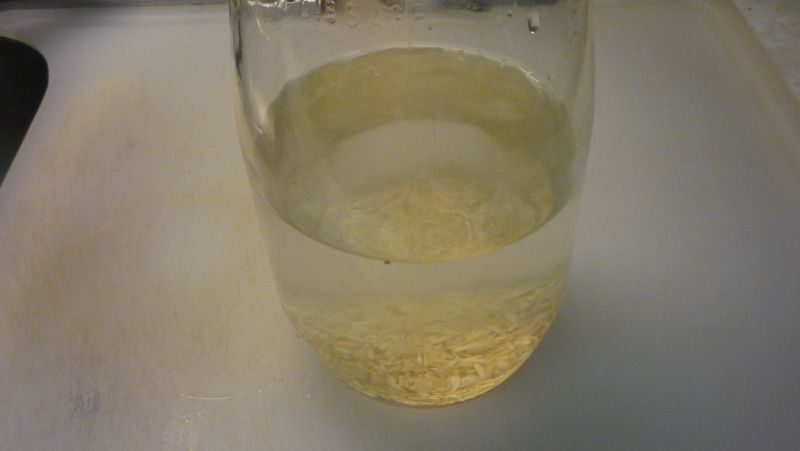 and boiled it for about 10 minutes in the microwave, to (1) sterilize it; (2) de-chlorinate and de-aerate the water; and (3) crack the rice hull and let the starch out. Then put on the lid and let cool to room temperature. 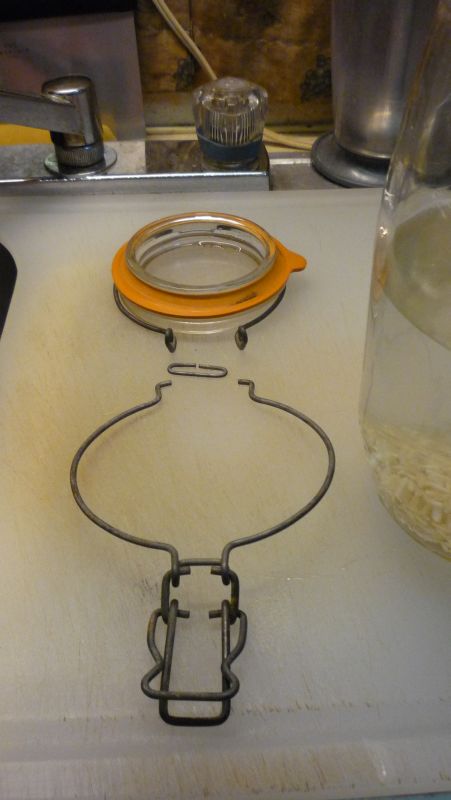 Be sure to remove the metal parts before using microwave!
Note that we use a fido jar because its springy clamp allows the lid to relieve the gas pressure that the bacteria will produce, yet keep the air out. 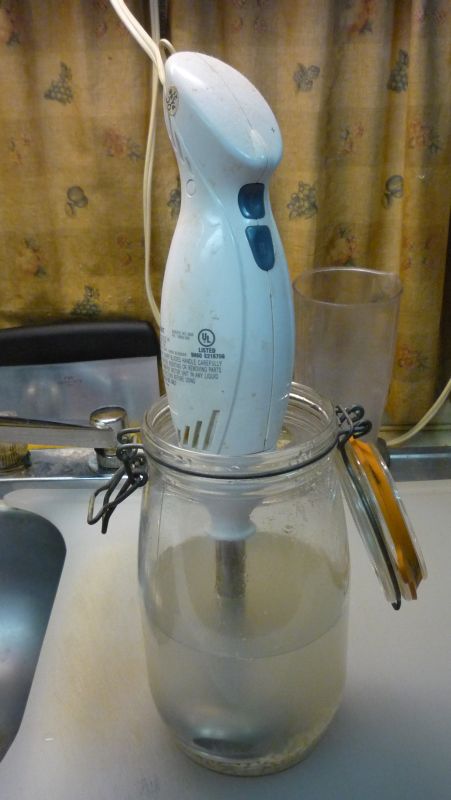 After cooling to room temperature, blast it with the stick blender, just to make sure there’s plenty of rice-starch in the water (white rice works better for this but I didn’t have any handy). 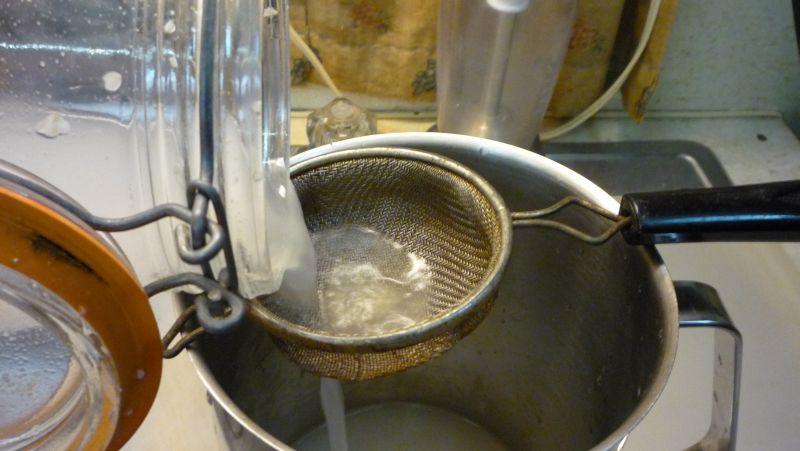 Strain out the rice and larger solids. 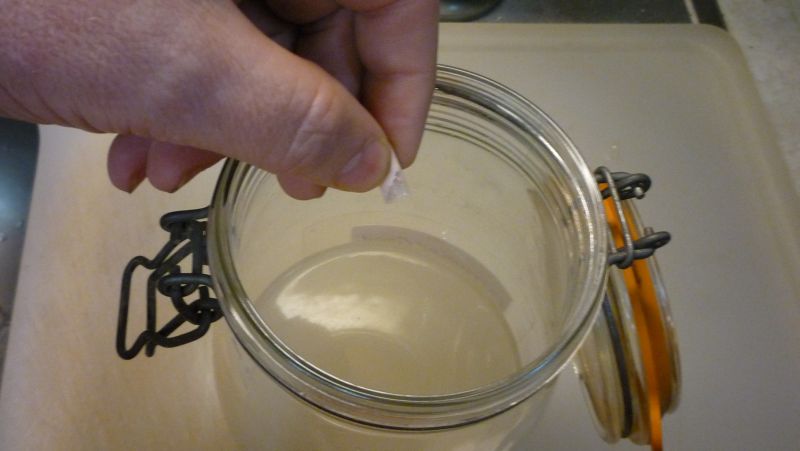 I added a probiotic capsule and a teaspoon of sugar (just in case some of the strains like it better than rice starch), and sealed it up. Blackstrap molasses is recommended, but I didn’t have any handy. 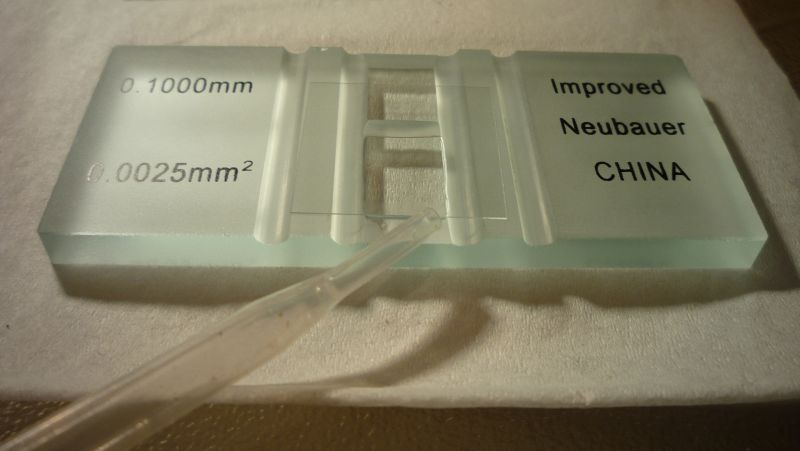 An hour later, I took a drop from the surface and loaded the hemacytometer

for an initial count. Note that, unlike a slide, you lay on the coverslip first, then add a small drop to the edge. Capillary action sucks it in and floods the etched plateau, and any excess runs into the moats. The plateau is 0.1mm below the slip, giving us a volume of 0.1 microliter per square millimeter. 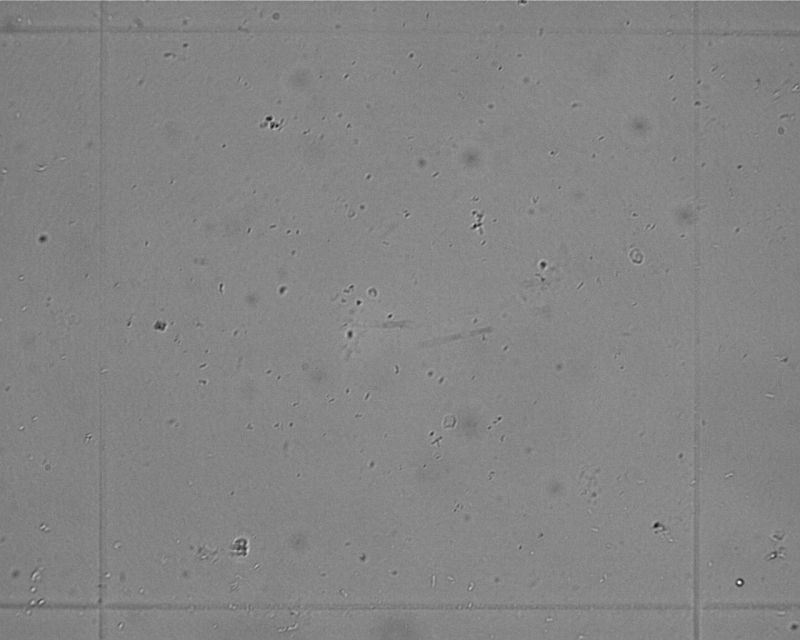 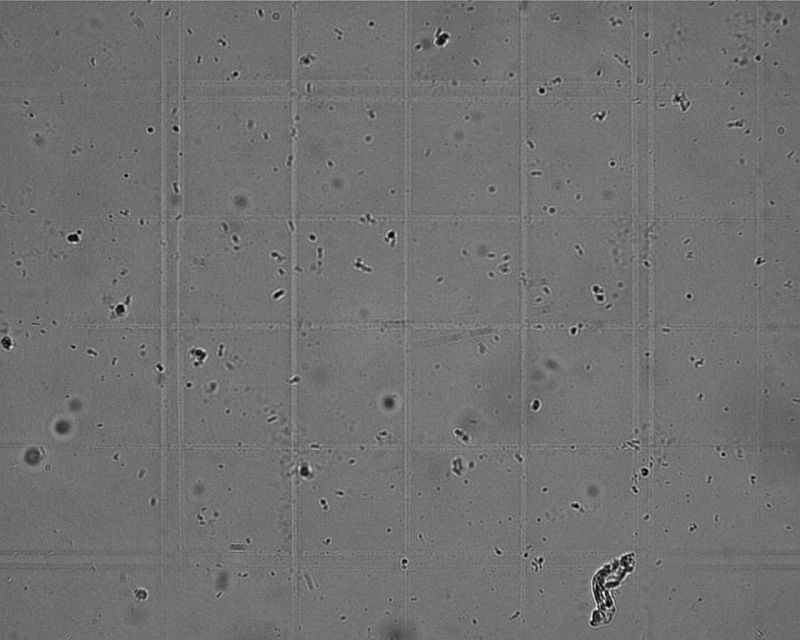 …so I used one of the 0.2mm-wide (0.04mm2 squares), counting live and dead in each of its sixteen 0.05mm-wide (0.0025mm2) squares. The depth is 100μm. There were about 49 moving and 67 dead or inactive. To count them at 400x, it’s necessary to stop the condenser iris way down to get fat diffraction rings and max depth-of-field, and then defocus a little—all we’re looking for here are blobs that wiggle, not best resolution.

Next Day: Is the culture growing?

The next day, I did another count, to see if the bacteria were growing, or dieing off, in my rice-starch-sugar-water mixture. 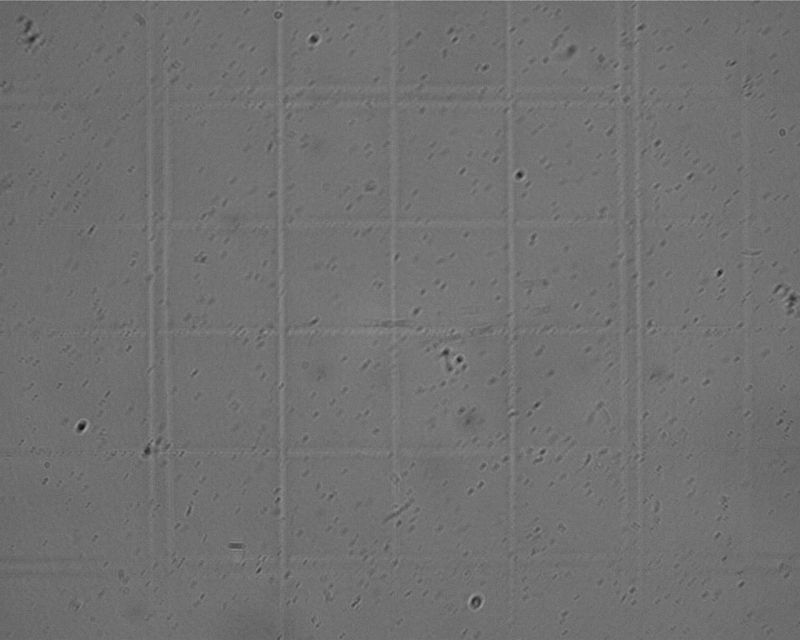 Taken from the top of the culture, 400x shows there are about 20 moving, and 2-4 not moving, per 0.0025mm2. That would be about 320 per 0.04mm2, compared to 49 yesterday. Yes! They are multiplying. Note how they all seem to be oriented diagonally. After a while, I realized this was caused by vibration from my nearby air conditioner. D’Oh! 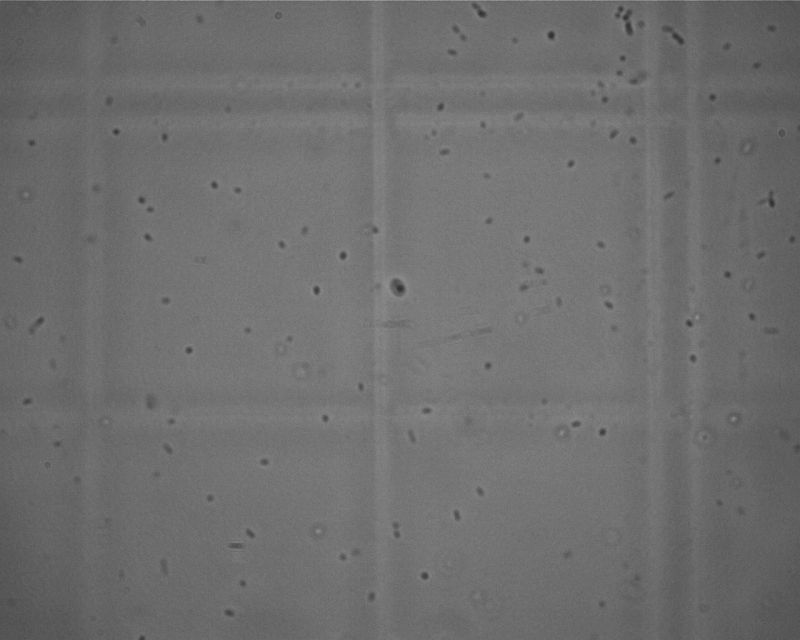 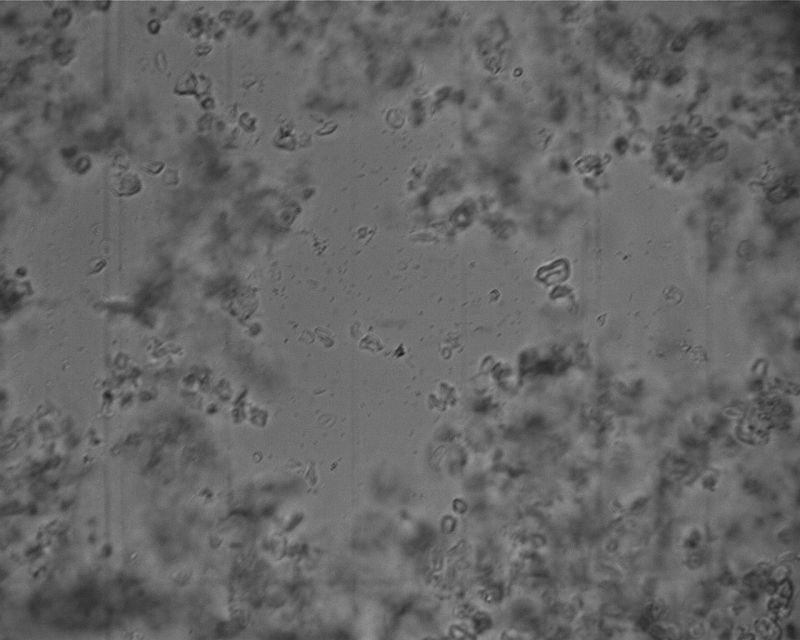 Then I wondered if they would be denser near the bottom, so I took a sample from the settled layer of rice starch. 400x. 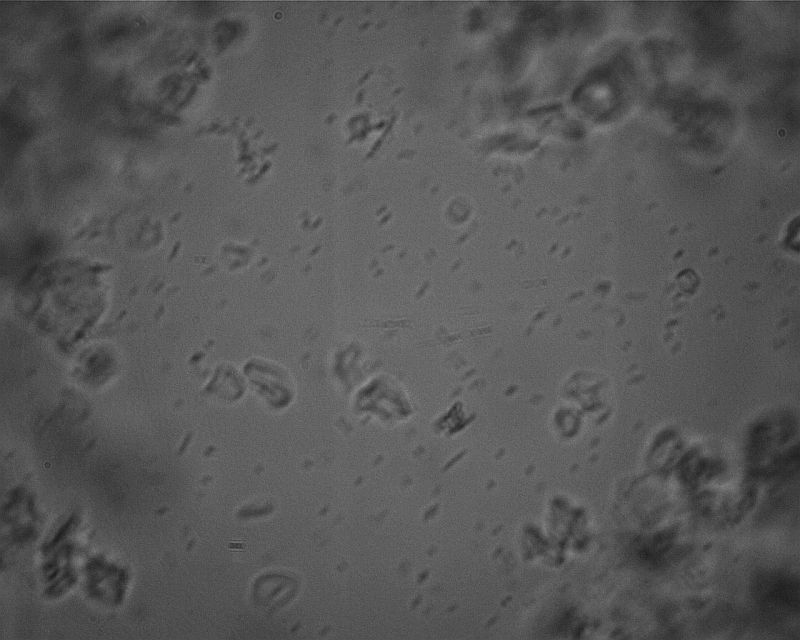 Same at 1000x. Yes, they are denser, at about 50 per square (200,000 per μL). Suprisingly, they are not clustered around the rice starch, but evenly distributed. I didn’t find any dead ones. Through the eyepiece, I could see many doublets in the process of mitosis (dividing). 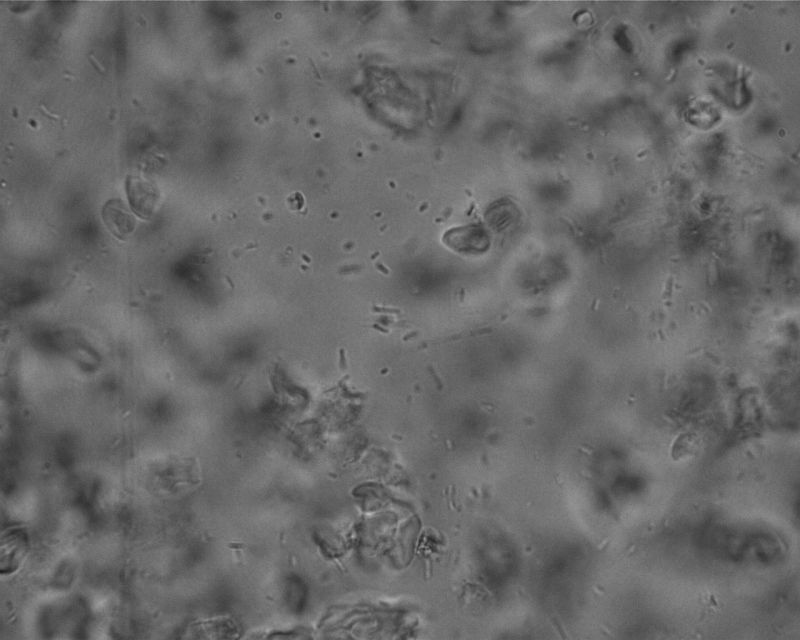 This is with oil immersion of the 100x objective. Note that the ones that are in focus are much sharper, though the depth of field is so shallow that they tumble in and out of focus. Occasionally I could briefly glimpse their true shapes—dots, double-dots, rods, and chains. A few rapidly swim through the FOV, but most are of the type that just wiggle around. The granules in the image are rice starch.

So there you have it! We’ve determined that:

Why culture it? Because the capsules are too expensive! Drink a half-cup a day (on an empty stomach), replenish with non-chlorinated water and a little black-strap molasses, and the culture can be maintained for a long time. Note that the culture should have a mild lactic acid smell (sorta like yogurt), but if your culture starts to stink, or turns dark or pink, throw it out!

Update: I did another count after about two weeks, and most were dead, so I guess they need need a better environment to keep multiplying. Perhaps better feed, or a warmer temp.