Clicking a panel opens a new tab to its source site. 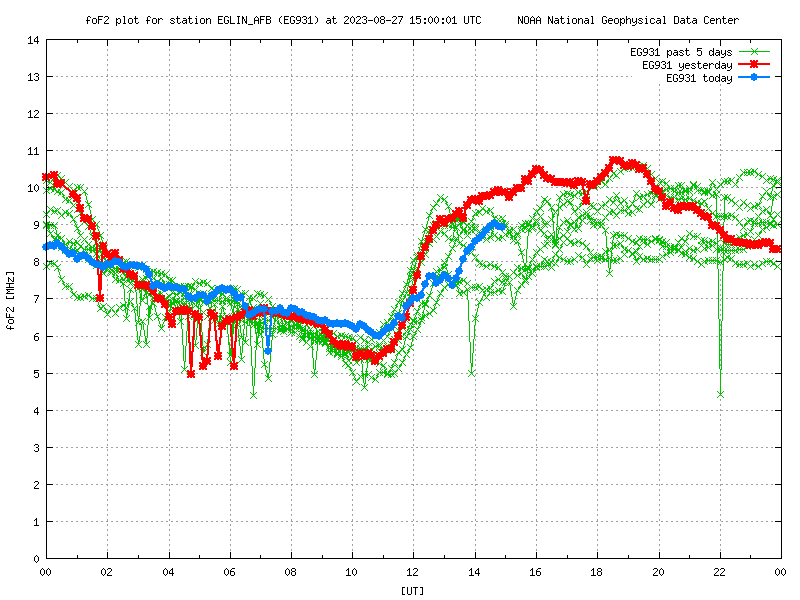 An Introduction to Space Weather and Propagation, in Plain Language

From the April 27, 2001 ARRL Propagation Newsletter, by Tad Cook K7VVV:

Amateur Radio operators who use HF generally like increased sunspots because they correlate with better worldwide radio propagation. When there are more sunspots, the sun puts out radiation that charges particles in the earth’s ionosphere. Radio waves bounce off of (refract from) these charged particles, and the denser these clouds of ions, the better the HF propagation.

When the ionosphere is denser, higher frequencies will refract off it rather than passing through to outer space. This is why every 11 years or so when this activity is higher, 10 meters gets exciting. 10 meters is at a high enough frequency, right near the top of the HF spectrum, that radio waves propagate very efficiently when the sunspot count is high. Because of the shorter wavelength, smaller antennas are very efficient on this band, so mobile stations running low power on 10 meters can communicate world wide on a daily basis when the sunspot cycle is at its peak. There are also seasonal variations, and 10 meters tends to be best near the spring or fall equinox. If the ionosphere is not so dense, the Maximum Usable Frequency may be below 10 meters, and perhaps only signals with frequencies as high as 15 meters or below will propagate. The sunspot numbers used in this bulletin are calculated by counting the spots on the visible solar surface and also measuring their area.

Solar flux is another value reported in this bulletin, and it is measured at an observatory in Penticton, British Columbia using an antenna pointed toward the sun hooked to a receiver tuned to 2.8 GHz, which is at a wavelength of 10.7 cm. Energy detected seems to correlate somewhat with sunspots and with the density of the ionosphere.

Other solar activity of concern to HF operators are solar flares and coronal holes, which emit protons. Since the charged ions in the ionosphere are negative, a blast of protons from the sun can neutralize the charge and make the ionosphere less refractive. These waves of protons can be so intense that they may trigger an event called a geomagnetic storm. In addition, energy from a solar flare may energize the D-layer of the ionosphere, which absorbs radio waves.

The Planetary A index relates to geomagnetic stability. Magnetometers around the world are used to generate a number called the Planetary K index.

A one-point change in the K index is quite significant. K index readings below 3 generally mean good stable conditions, and above 3 can mean high absorption of radio waves. Each point change reflects a big change in conditions.

Every 24 hours the K index is summarized in a number called the A index. A one-point change in the A value is not very significant. A full day with the K index at 3 will produce an A index of 15, K of 4 means A of 27, K of 5 means A of 48, and K of 6 means A of 80. You can find an explanation of these numbers on the web at
http://www.ngdc.noaa.gov/stp/GEOMAG/kp_ap.html.

The geomagnetic number reported here is the Planetary A index, which is a worldwide average based on the K index readings from a number of magnetometers. The numbers reported on WWV are the Boulder K and A index, measured in Colorado. Generally the higher the latitude of the measuring station, the higher the K and A indices reported. This is because the effects of geomagnetic instability tend to concentrate toward the polar regions of the globe. You can hear the Boulder K index updated every three hours on WWV, or by calling 303-497-3235.

For an interesting web page on the earth’s magnetosphere, check
http://science.nasa.gov/

Our thanks to Tad Cook K7VVV for this down-to-earth description of solar phenomena that affect radio communication.

◄— How to Become an Amateur Radio Operator — Balloon Repeater —►

One thought on “Solar Activity”