I spent the past week completely rebuilding the Chris Mathes Soapsheet in OpenOffice Calc. My new version includes fat/oil properties (like soapcalc.com), with a normalized bar graph. Updated all the fat/oil/butter prices from extensive web searching. The new sheet also has dynamic scaling and soap volume calculations.

Once I had the ’sheet working right, it was lots of fun to change oils and weights, and watch the properties change on the graph. It instantly shows the interactions of the various oils’ properties, making it fairly easy to find a balanced mix, or push around any desired soap property. 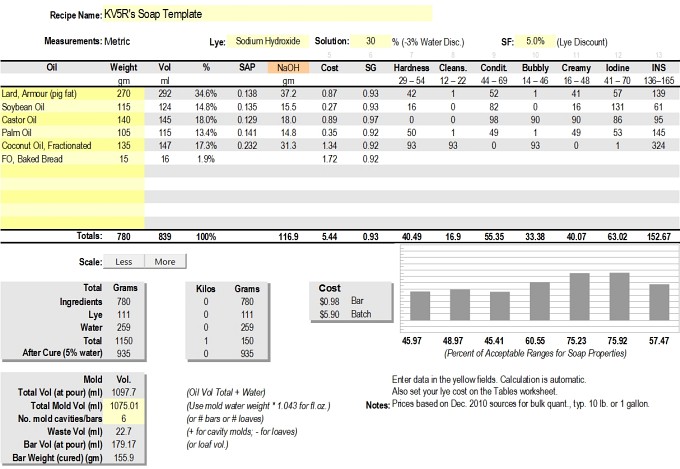 I started out designing a 4-oil recipe with what’s on-hand, including fractionated coconut oil. It just would not balance its properties. Then I added the lard and things started looking better. After another hour of fine tuning I hit upon the nice balance of properties that you can see in the graph.

Some soapers say that animal fat soaps clog your pores or are otherwise undesirable. Baloney. Once any fat/oil is saponified, it is no longer what it was—it’s now soap, not fat. The lard is cheap, and it helped balance properties the oils were missing. Here’s a shot of all the stuff I put in this batch: 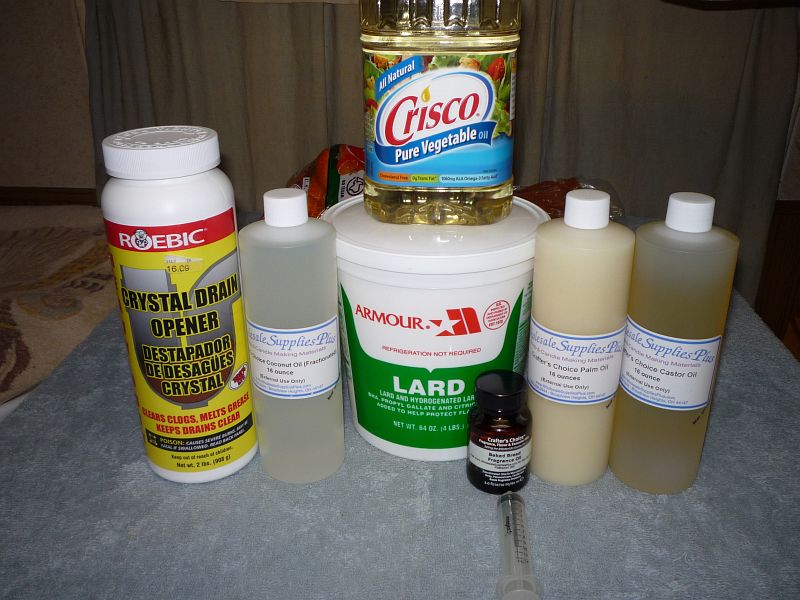 Developed using my new & improved soap recipe designer, with the goal of balancing all the properties near mid-range.

This time I’ll get the lard and oils heated, weighed, and mixed first, then put all that oil stuff away, then make the caustic solution. I have such limited counter space!

Total time: about 1 hour, including pictures and clean-up.

The process went very well. From past experience, I planned to pour sooner and make prettier bars with smooth tops and no side bubbles. It took about 2 minutes to light trace and, after the FO, about 20 seconds more to medium. It was at pudding thickness by the end of the pour. This time, my volumetric calculations were perfect! The last bar was level with a good pot scraping.

Checked two hours later. Yep, it’s doing a nice warm gel phase. The weight on top of the polyiso insulation has the top of the soap nice and smooth. The baker’s parchment is a good mold cover: it lets out air bubbles, and doesn't stick to the soap (but it wrinkles later). These are gonna be perfect-looking square bars, requiring little or no trimming. Checked 6 hours later and it’s still in gel! The polyiso box works much better than a big towel, and is much easier to handle. 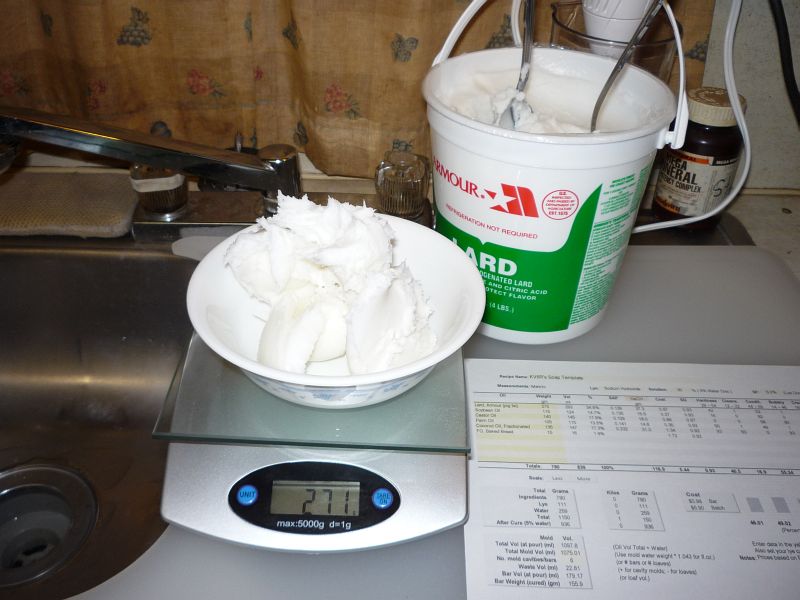 And so thare I was, justa waaaayin’ out them thare hawg rendrins… 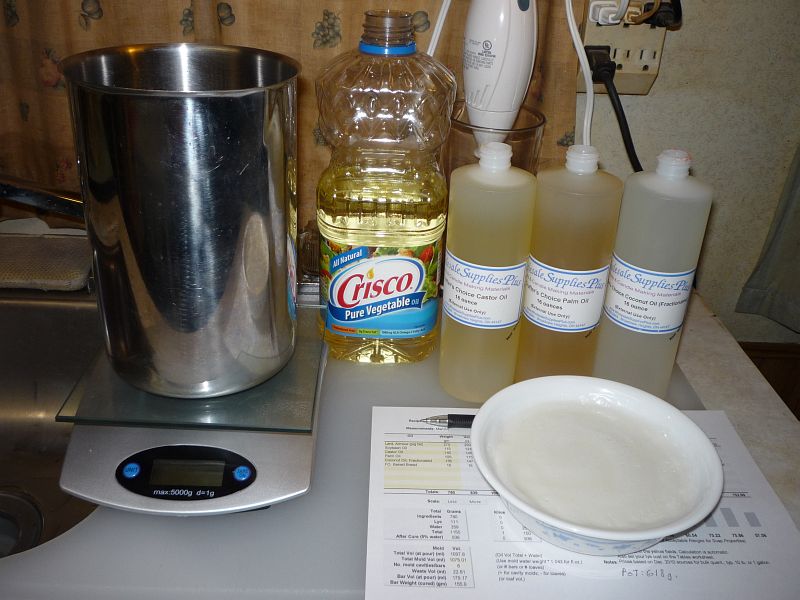 Hard oils (lard, palm) heated up; all lined up in list order… 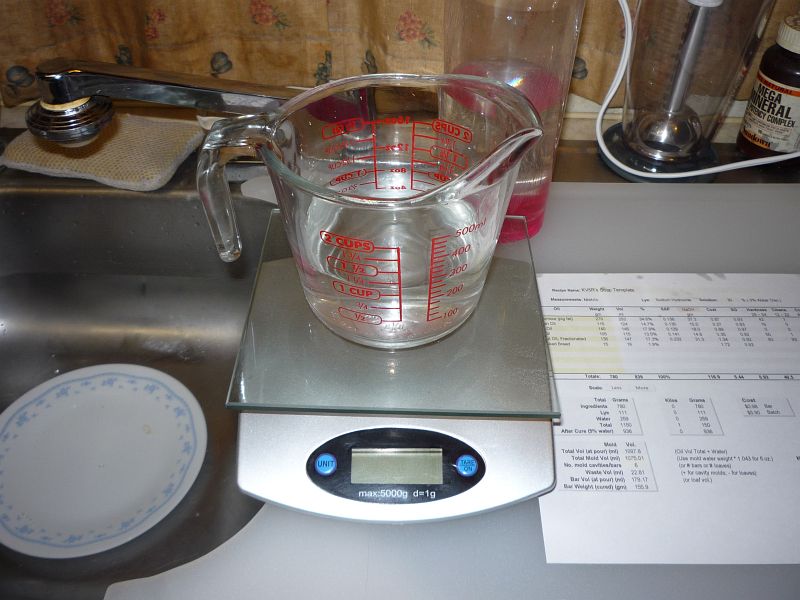 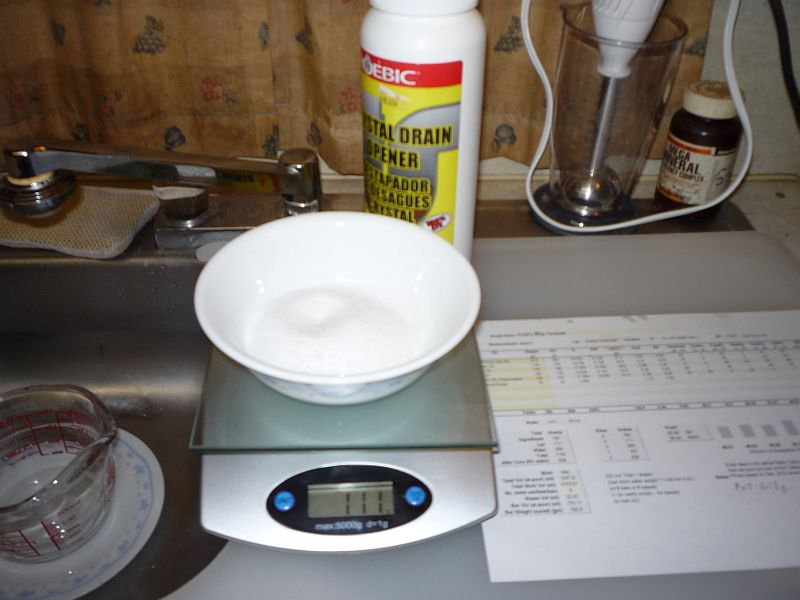 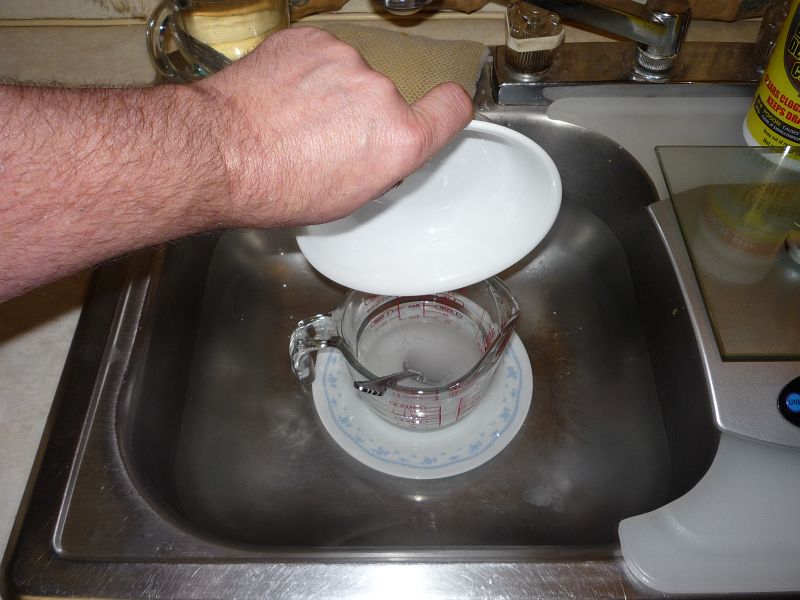 Dumping it in the water (carefully), then stirring it… 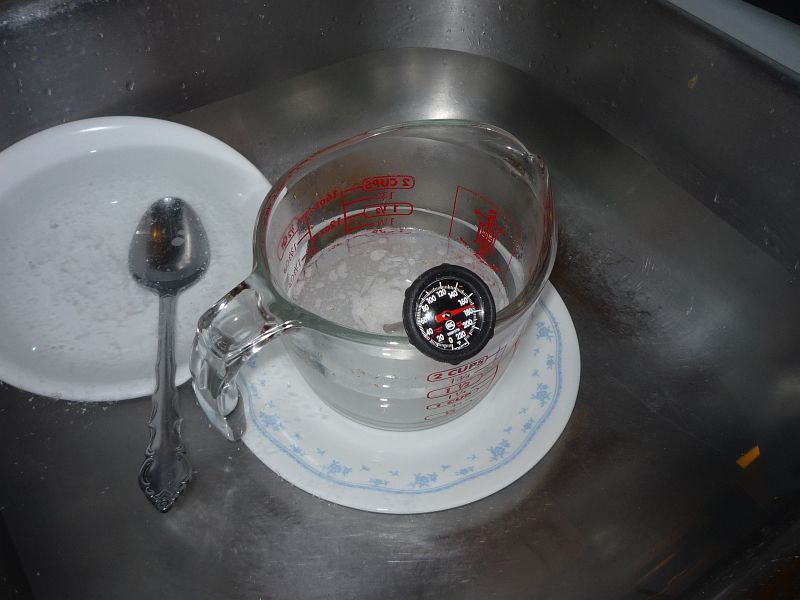 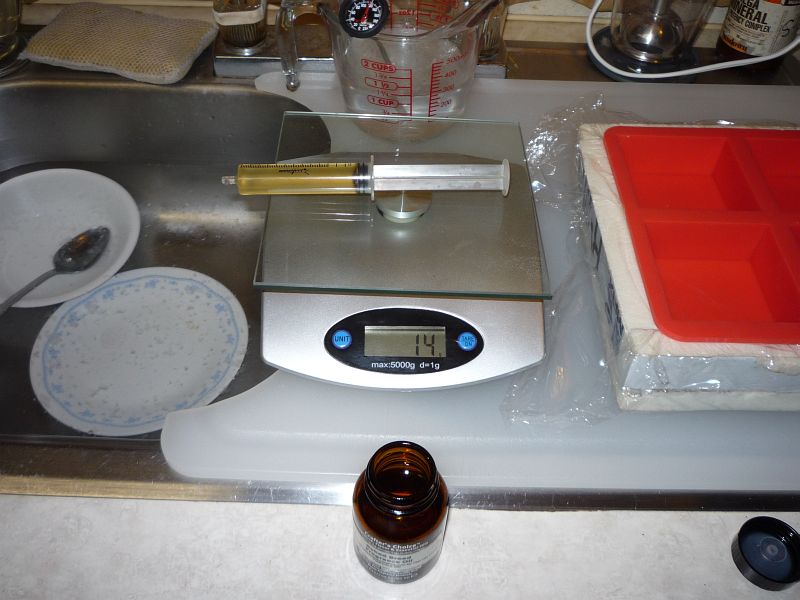 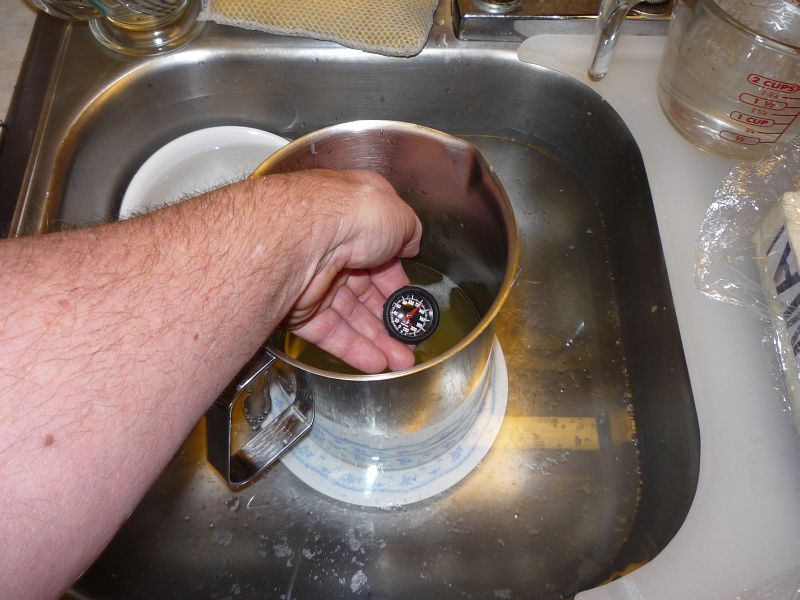 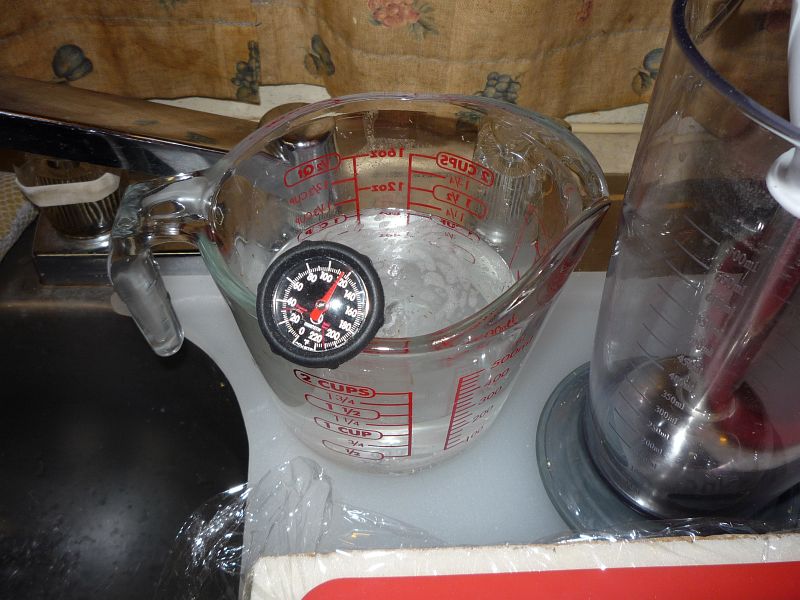 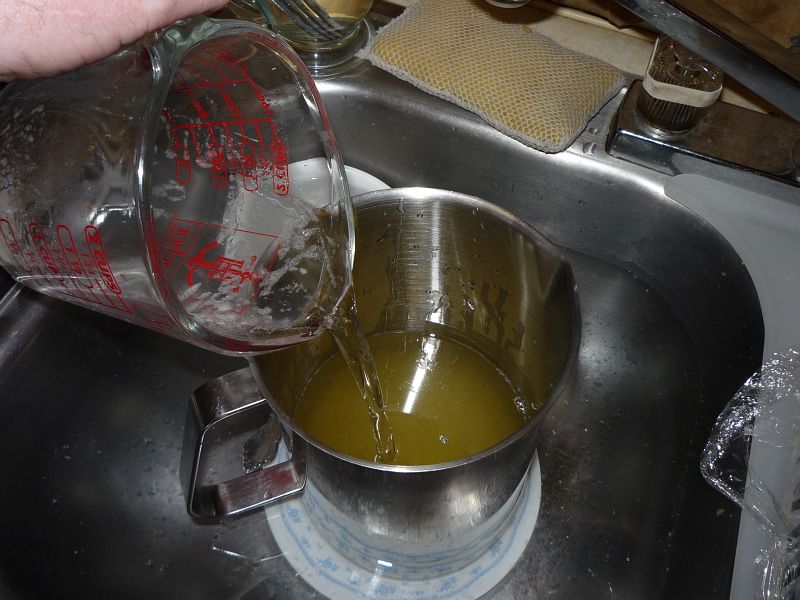 Pour it! Nice and smooth—no splashing… 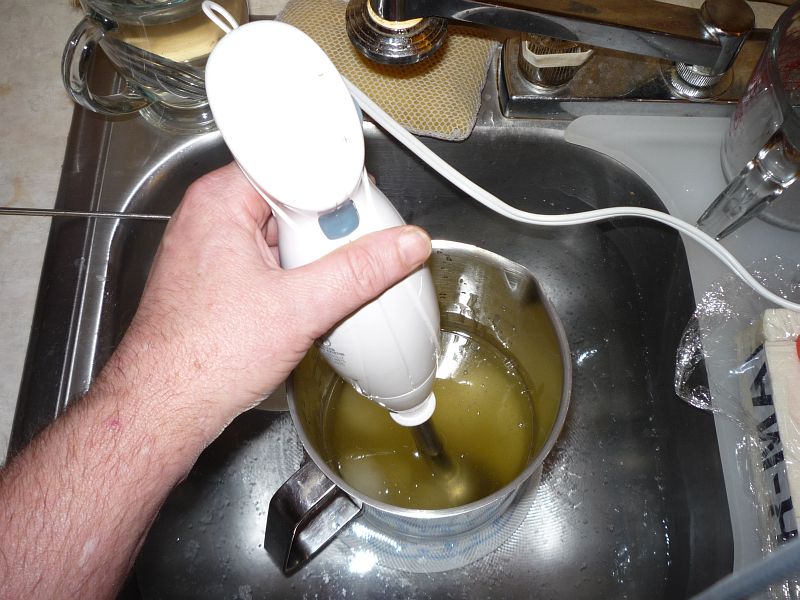 Whizz and stir… (about 2 minutes)
Check out that neato vibration pattern on the sink water! 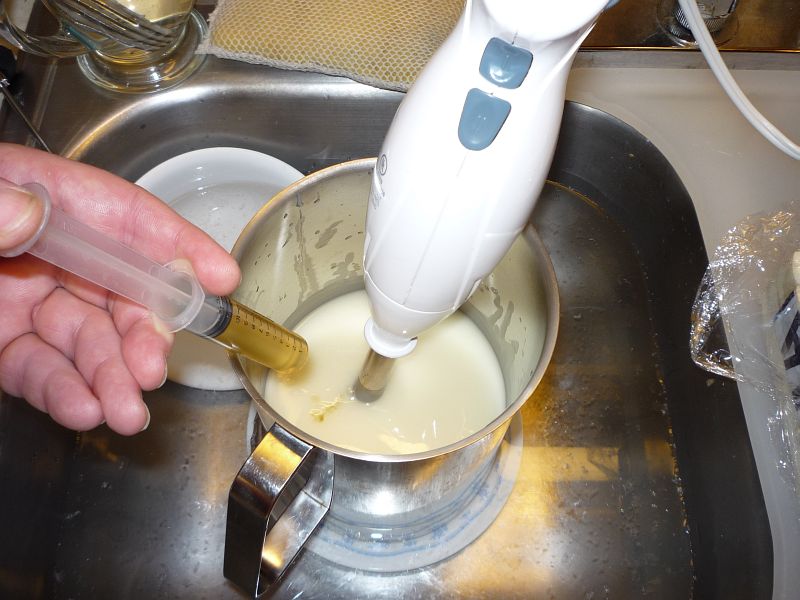 Light trace: shootin’ in the fragrance, then whizzin’ some more (~20 seconds)
There’s that “light custard” look they’re always talkin’ about… 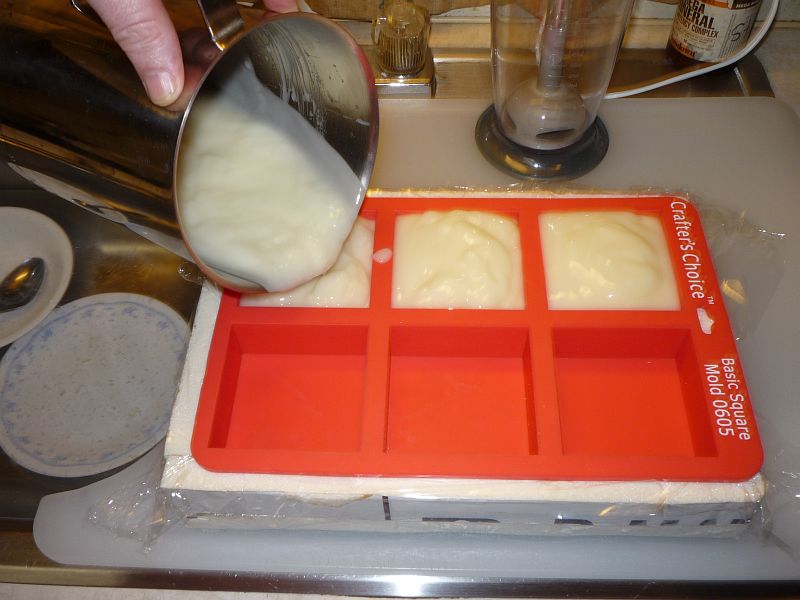 Hurry now! It’s rampin’ up fast! Pour!
It got a bit lumpy during pour. Is that from the FO? I donno. 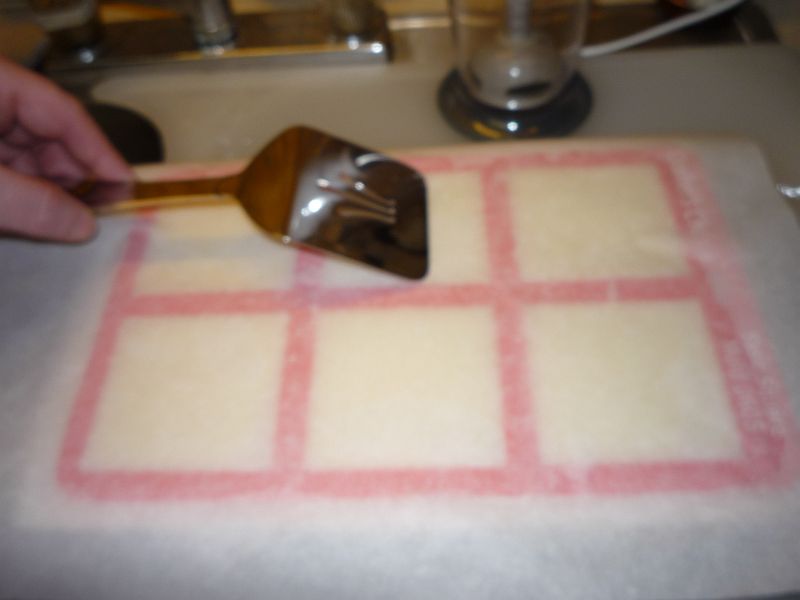 Cover with baker’s parchment and slick it out… (sorry, bad auto-focus) 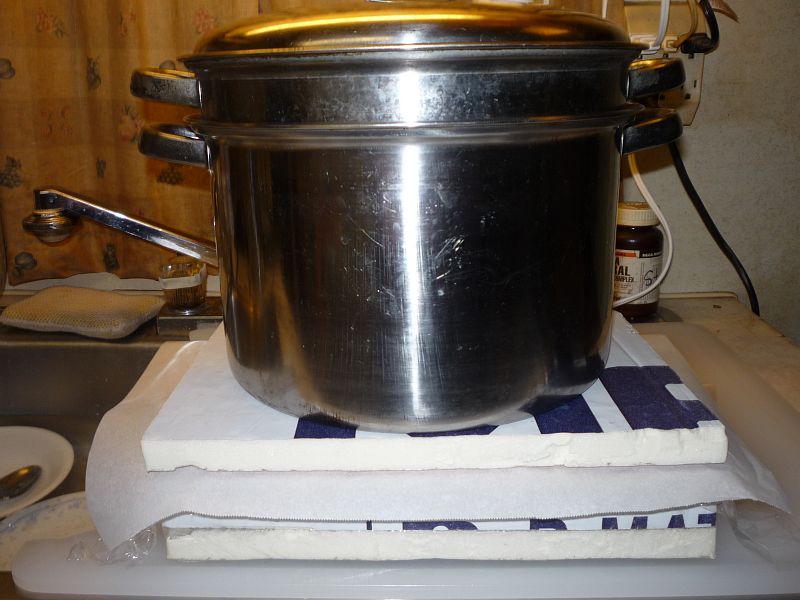 Cover with polyiso insulation and mash it down. All done.

Tomorrow: Un-molded about 15 hours later. Two minor disappointments: (1) the baker’s parchment wrinkled up a little, giving one side of the soap fine wrinkles, and (2) some wierd separation happened in one corner of one bar. It otherwise looks like a good batch. 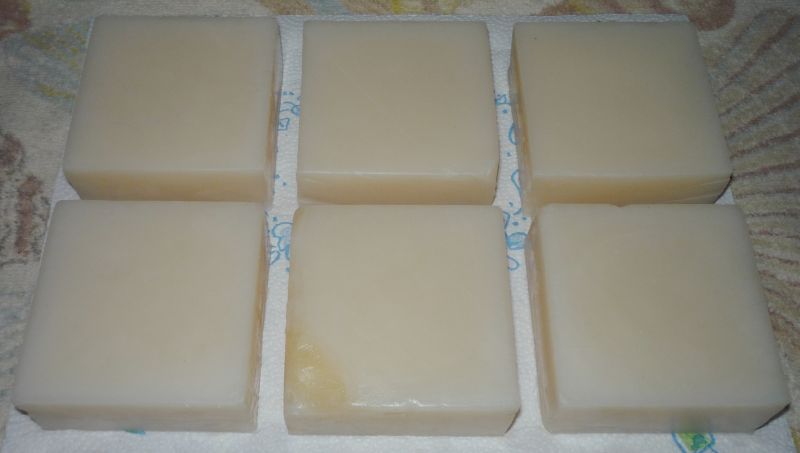 So there it is, ready for curing. Notice the one wierd corner? Donno.

I showered with it a few days later. Handling it, it feels a bit greasy, but it isn’t—that’s just a silky soap that rinses off squeaky-clean! I like it. Good cleansing, creamy suds, and easy rinse. What more do you want? Shea butter? Avacados and cucumbers? I let Waggin’ sniff it with his picky one-part-per-billion nose, and he actually licked it! The Baked Bread FO that I sparingly used is just barely detectable, and mildly pleasant. I’m very happy with this batch—it’s a true luxury soap with well-balanced properties.

So there’s my fourth batch. What did I learn?

I found 76° coconut oil at Walmart, LouAna, $5.25 a pound. I’ll be using that with soybean, palm, and castor in the next two batches, which will be flavored with Clary Sage EO and a brushed leather FO. Shoud be nice!

Stay tuned for more in the coming weeks. My next batch will be a winter moisturizing bar, with the cleansing pushed way down and the conditioning pushed way up. Sorta between a bath bar and a facial bar.